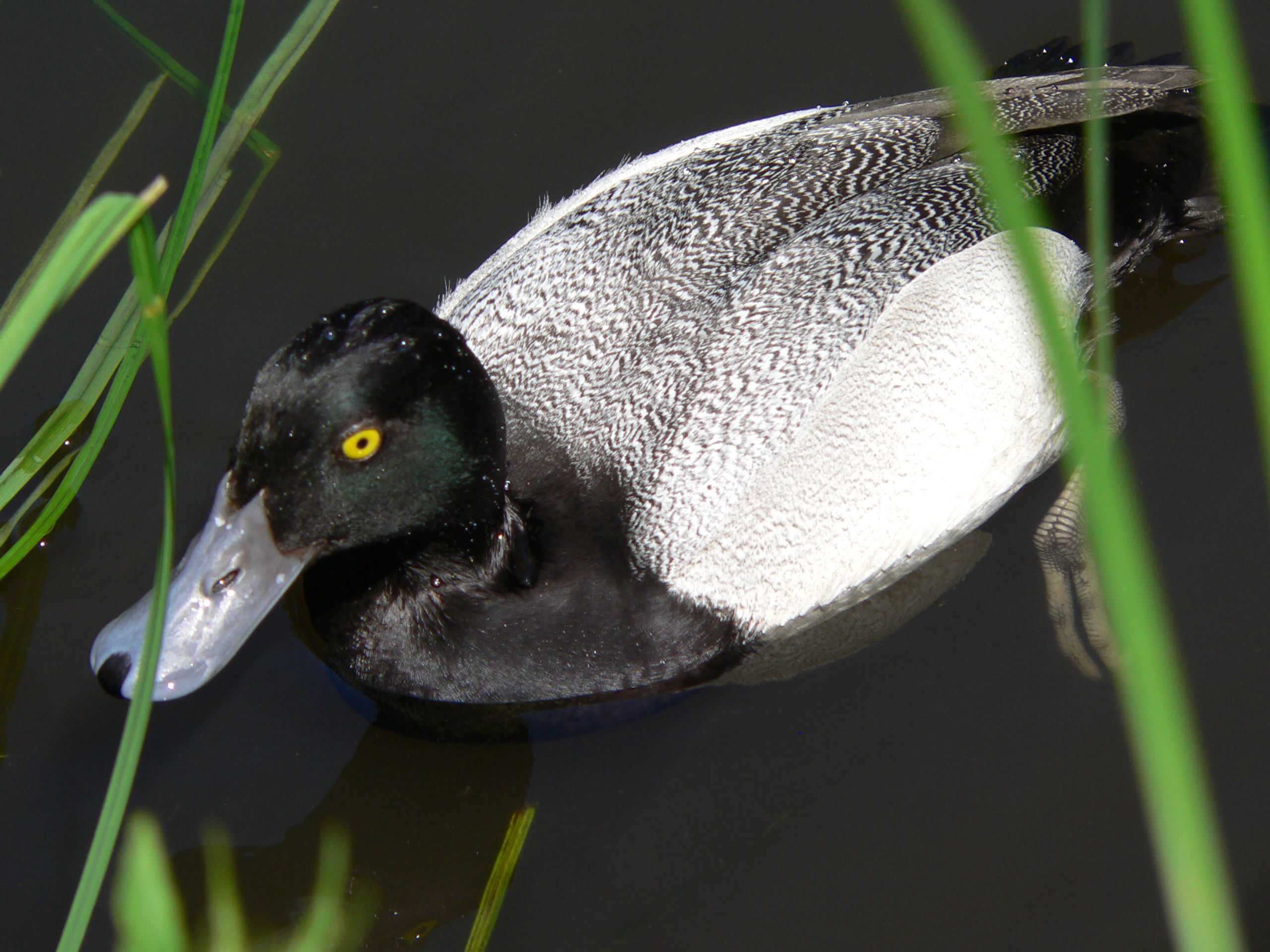 The Lesser Scaup ("Aythya affinis") is a small n .

Adults are 38–45 cm long, with a blue bill and yellow eyes. Adult males have a dark head with a purple sheen, a black breast, a light gray back, a black tail and white underparts. Adult females have a white band at the base of the bill and a brown head and body. They are smaller than the , but may be an offshoot thereof, or they may both be descendants from a common ancestor.

There can be difficulty in distinguishing the Greater and Lesser Scaup. The differently colored sheen on the head is unreliable because light conditions vary, and these birds are often far from the water's edge.

The Lesser Scaup is best identified by its much smaller size, different head shape with a peaked hind crown, and a white wing bar that is visible only on the secondaries. (It extends onto the primaries in Greater.) The drake also shows vermiculations on the back. In North America, a large scaup flock will often have both species present.

Their breeding habitat is marsh ponds in , western , and westen . Lesser Scaup migrate in flocks and winter in lakes, rivers and sheltered coastal waters along the coast from southern to northern . They are more likely to be found on fresh water than Greater Scaup. These birds move south when the young are fledged and return in early spring. In , flocks are present from July on, but only really numerous after September. They move north again in April and May [Herrera "et al." (2006)] .

They are a rare but apparently increasing vagrant to western , where the identification also needs to exclude similar-looking hybrids. The first British record was a first-winter male at , in 1987 [Evans (1987)] but by 2006, over 60 had been recorded Fact|date=June 2007.

They nest late in a sheltered location on the ground near water. Their chicks usually do not hatch until July, and they are one of the later types of to migrate south.

Although the Lesser Scaup has the largest population of any species of diving duck in North America, their population has been steadily declining since 1985, and reached an all-time low in 2005. is one cited cause of the decline, although the decline is poorly understood. [ [http://www.ducks.org/news/1093/DuckoftheMonthLesser.html Duck of the Month - Lesser Scaup ] ] [ [http://www.ducks.org/hunting/waterfowlgallery/11/index.html Lesser scaup Facts, Figures, Description and Photo ] ]