Denise Mina (born 1966, Glasgow) is a Scottish crime writer and playwright. She has written the Garnethill trilogy and another three novels featuring the character Patricia "Paddy" Meehan, a Glasgow journalist. Described as an author of Tartan Noir, she has also dabbled in comic book writing, having recently written 13 issues of Hellblazer.[1] Since 2006, she has had two plays performed with successful reception.

Mina's first Paddy Mehan novel, The Field Of Blood, has recently been filmed by the BBC for broadcast in 2011, and stars Jayd Johnson, Peter Capaldi and David Morrissey.[2]

Denise Mina was born in Glasgow in 1966. Her father worked as an engineer. Because of his work, the family moved 21 times in 18 years: from Paris to The Hague, London, Scotland and Bergen. Mina left school at sixteen and worked in a variety of low-skilled jobs, including: bar maid, kitchen porter and cook. She also worked for a time in a meat processing factory. Prior to attending university in her twenties, she worked in auxiliary nursing for geriatric and terminal care patients.

It was while researching a PhD thesis on the ascription of mental illness to female offenders, and teaching criminology and criminal law at Strathclyde University in the 1990s, that she decided to write her first novel Garnethill. Published in 1998 by Transworld, the book won the Crime Writers' Association John Creasy Dagger for Best First Crime Novel. 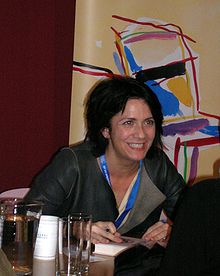