George of the Jungle (film)

George of the Jungle (film)

Infobox_Film
name = George of the Jungle 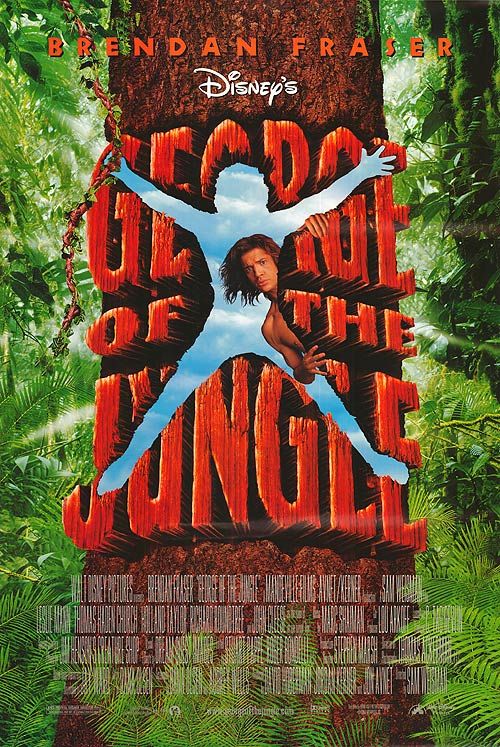 "George of the Jungle" is a romantic-family comedy film based on the characters from the original cartoon of the same name. This film was produced by , and originally released to in . It starred as the eponymous main character.

The film was followed by "", in which George and Ursula have a son.

Ursula Stanhope is a beautiful, blonde American heiress, reluctantly engaged to marry one Lyle Van De Groot, who seems more attached to his fiancee's wealth than to her. On an expedition to , joined by Lyle and two men he hired named Max and Thor, Ursula is rescued from a attack. Her savior is a young man named "George" (), who is stated to have survived an crash as a child, to be raised in the jungle by a talking, highly intelligent named Ape (voiced by ). George now lives on friendly terms with most animals. He is quite clumsy, a tendency manifest in his collisions with s and his less than secure footing; but takes all mishaps in stride. However, during her rescue, George accidentally knocks her out on a tree branch and takes her back to his jungle treehouse.

Ursula is charmed by George and they become friends. She is introduced to George's pet Shep. George begins to fall in love with her; with Ape's variably dependable advice, he makes attempts at courtship, which meet with some success. Lyle and the rest of the expedition search for Ursula, during which time it is revealed that the men Lyle hired are poachers. He finds George's tree house, and tries to persuaded Ursula to come with him. She calls George, whereupon Lyle tries to stop George in his tracks by menacing his rival. He threatens George with what he believes to be a -shaped cigarette lighter, only to discover that it is in fact a pistol, having been exchanged with the true cigarette lighter by a porter. George is shot, but survives, and Lyle is sent to prison. Max and Thor attempt to capture Ape, whom they have overheard speaking in English. They are arrested and sent to jail, but are released on a technicality. Ursula returns to her home in , taking George with her to "get him the best medical treatment available".

In San Francisco, George is introduced to the society of humans. He proceeds to make a remarkable impression upon his new acquaintances, especially those of the female gender. This involuntary disturbance of the norms includes his rescue of a stranded parasailor.

Ursula's parents throw a engagement party for Ursula, at which her mother, Beatrice Stanhope, realizes George's affection for Ursula might spoil her plans to marry her daughter to Lyle. Mrs. Stanhope then lectures George on the unsuitability of any relationship he might have with Ursula; discouraged, George returns to Ursula's flat. There, he finds his friend Tookie Bird, who tells George that Max and Thor have stolen Ape to take him to vagas to make a fortune. Soon afterward, Ursula has realized that she reciprocates George's affection and decides to follow him to Africa.

George returns to Africa to save Ape, who fortunately has been misleading his captors into following false trails. Ursula arrives in George's wake, to discover that Lyle has escaped from jail, hired mercenaries, and gained a priesthood which allows him to perform marriages. He then kidnaps the young woman so he can marry her against her will. George finds Ape, defeats Lyle's henchmen in a fistfight, aided by a few other gorillas, and condemns the poachers to be the destination of Shep's urine. He then embarks to rescue Ursula, who is now in a with Lyle, floating down river rapids. He rescues Ursula, whereinafter Lyle is left in the raft with a flirtatious female ape. After admitting they love each other, George and Ursula are married in a lavish jungle celebration on the next and eventually have a son, also named George, who would feature in "". Ape travels to Las Vegas, where he becomes a performer, having Max and Thor become stage props of his program.

* - George, King of the Jungle
* - Ursula Stanhope
* - Lyle van de Groot
* - Ape the gorilla (voice)
* - Kwame, Ursula's jungle guide
* - Max
* - Thor
* - Beatrice Stanhope
* - Betsy, Ursula's friend, who like all women George meets is infatuated with him.
* - Arthur Stanhope
* Keith Scott - Narrator, who plays an active role in the story by breaking the , making wry comments, editing the story as it progresses, and interacting with the characters.
* - voice of Little Monkey, Shep, Tooki Tooki Bird, and gorilla sound effects [ [http://voicechasers.com/database/showprod.php?prodid=101 George of the Jungle] , ]

In the opening animated sequence, various animals swing on vines with young George, his "dog" Shep fetches a crocodile instead of a log, and a wildebeest falls in love with a bushman wearing a wildebeest mask.

In the live action movie, a whole host of animals are seen. George fights with a lion, accidentally swings on a snake instead of a vine, rides an elephant, talks to a bird, and lives with various monkeys and apes.

The lion, elephant, and bird scenes were all filmed with a mix of real animals, puppetry (especially for the lion fight), and CGI (to show the elephant acting like a dog). The scenes with the and the s were filmed with live animals, but some computer work was used in a scene wherein the little monkey imitates George. The large Apes who live with George were all costumed actors or animatronic figures. In the "Pride Rock" scene, when George presents his son to the animals, CGI work is again used. [ [http://www.ahafilm.info/movies/moviereviews.phtml?fid=6121 Movie Review - George Of The Jungle ] ]

Track #2, the song "Dela", also features the first few bars of the George of the Jungle theme song.