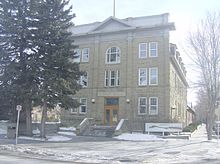 The Alberta Ballet (also known as the Alberta Ballet Company) is located in Calgary and Edmonton, Alberta. It is Canada’s third largest dance company. Alberta Ballet has developed a distinctive repertoire and performance quality that has brought it to the forefront of national and international stages.

The Alberta Ballet was founded by Dr. Ruth Carse in the early 1950s and became a professional company in 1966.

The Alberta Ballet continued to develop under artistic directors Jeremy Leslie-Spinks (1975), Brydon Paige (1976–1988), and Ali Pourfarrokh (1988–1998). During Pourfarrokh's tenure, in 1990, the company merged with the Calgary City Ballet and moved into the Nat Christie Centre in Calgary. It continues to provide ballet performances in both Edmonton and Calgary.

The arrival of former San Francisco Ballet star Mikko Nissinen as artistic director brought the company to a new level. Nissinen introduced Balanchine works, while continuing to commission new works from Canadian and international choreographers. He toured the company to China, Finland, and Egypt.[1]

Most recently, the company was the stage on which up and coming Canadian choreographer, Sabrina Matthews began to develop her craft. She has created pieces for some of the world's leading ballet companies and is considered one of Canada's brightest new dance makers.

The 2009-2010 season will feature the following ballets: Romeo and Juliet, The Nutcracker, Moulin Rouge The Ballet (performed by the Royal Winnipeg Ballet), the World Premieres of Songs of a Wayfarer and The Seven Deadly Sins, and the World Premiere of ELTON, a new creation in collaboration with Sir Elton John.

The School of Alberta Ballet is the official training centre of Alberta Ballet. Established in 1991, the school has become one of Canada's leading dance training institutions. Dedicated to providing superior training in a friendly, stimulating and creative environment, it offers two divisions and multiple program choices to nurture and help develop young dancers to their greatest individual potential.

The School of Alberta Ballet's curriculum is strongly rooted in the classical ballet tradition, influenced by the Vanagnova (Russian) System and the Cecchetti (Italian) Method. It includes complementary dance forms such as modern, jazz, and character dance. The School of Alberta Ballet is committed to diversity[clarification needed], and invites students from all locations and backgrounds. It particularly encourages boys to explore the opportunity for ballet training and offers scholarships to assist in doing so.

Leading a team of internationally acclaimed and highly qualified teachers, Murray and Nancy Kilgour are two of Canada's most respected dance educators. Entrance into the Professional Division is by audition only and begins at age 10. The school runs an all-day Pre-professional Graduate Program as well as a transfer credit partnership with the University of Calgary for its BA Dance degree. However, the partnership between The School of Alberta Ballet and the Department of Dance at the University of Calgary has ended, officially discontinuing the Ballet stream and leaving Contemporary Dance as the only route of study.