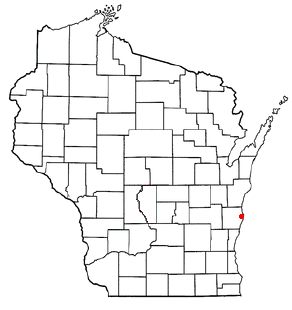 There were 20,779 households out of which 29.7% had children under the age of 18 living with them, 48.2% were married couples living together, 9.4% had a female householder with no husband present, and 38.4% were non-families. 32.2% of all households were made up of individuals and 12.6% had someone living alone who was 65 years of age or older. The average household size was 2.39 and the average family size was 3.05.

Sheboygan is served by the , which is located several miles from the city.

Sheboygan is bounded on the east by . There are no active ports in the city. The current site of sits on a between the lake and the Sheboygan River's last bend that was formerly used by the C. Reiss Coal Company (now a division) as their headquarters and base of operations, where ships would load and unload from large heaps along the peninsula. The company's former headquarters building on North 8th Street is currently being converted into a condominium development.

The also passes through the city, but waterfalls upstream in Sheboygan Falls prevent navigation, while tall-masted boats are confined to the river downstream of the Pennsylvania Avenue bridge. Commercial charter fishing boats dock near the mouth of the river.

The city's only daily newspaper is "", which has published since 1907. The free papers "The Sheboygan Sun" and "The Beacon" are each mailed once weekly to area residents and feature classified ads and other local content.

As Sheboygan is located mid-way between Green Bay and Milwaukee, residents of the city can choose from television and radio stations originating within each of those areas. places Sheboygan officially within the Milwaukee market, although Green Bay stations also report news, events, and weather warnings pertaining to Sheboygan and target the city with advertising.

places Sheboygan and Sheboygan County within one radio market, and several stations serve the area. owns four stations within the county, including talk station WHBL (1330), country station (93.7), hot AC operation (104.5 from Plymouth, with a translator station on 96.1 in Sheboygan), and Sheboygan Falls-licensed hard rock (106.5), all of which transmit from a three-tower site on Sheboygan's south side. affiliate (950) also serves the city, along with the Sheboygan Area School District's WSHS (91.7), a member of the Ideas Network, Plymouth's (1420), a standards station, Kiel's WSTM (91.3), and various translators of stations originating from north of Green Bay and Milwaukee.

The city is served by , with programming on " [http://www.tv8wscs.com WSCS ] " channel 95 () or 990 (). The city has one licensed television station, , which is currently off the air due to the digital switchover and previously aired TBN programming.

Notable Businesses and Points of Interest

Notable people with ties to Sheboygan

Sheboygan County is famous for its bratwurst, including the well-known Johnsonville and Old Wisconsin . [cite web| title=Sheboygan County Registrar of Deeds| url=http://www.co.sheboygan.wi.us/html/d_regdeeds.html] The city of Sheboygan's s have an annual fundraising festival called Bratwurst Days, which includes the Johnsonville World Bratwurst Eating Championship. [cite web| title=History| publisher=Sheboygan County Chamber of Commerce| url=http://www.sheboygan.org/community/history.asp] [cite news| title=City asked to abolish brat-eating contest| first=Eric| last=LaRose| date=| work=The Sheboygan Press| publisher=Gannett| url=http://www.sheboygan-press.com/apps/pbcs.dll/article?AID=/20060301/SHE0101/603010492/1062] The 2005 contest was part of the . The event was won by professional eating champion , who set a world record by eating 34.5 bratwurst in 10 minutes. Footage of the event was aired on and CNN. The 2006 contest (airing on a same-day tape delay on ) featured , who easily broke the record by eating 58 bratwurst. [cite news| url=http://sports.espn.go.com/sports/news/story?id=2540728| title=Best of the wurst: Kobayashi eats 58 brats for win| publisher=Associated Press| date= ]

Sheboygan has several sister cities, including flagicon|Germany , and flagicon|Japan , . Sheboygan does student exchanges with both cities. [cite news| url=http://www.sheboygan-press.com/apps/pbcs.dll/article?AID=/20070305/SHE0101/703050441 | title=Hungry still get their fill at Taste of Sheboygan | publisher=Sheboygan Press| date= | accessdate=2007-04-11 ]

* The tallest flagpole in the United States was raised on at . The steel pole is convert|338|ft|m high (103 m) , 6 feet (1.83 m) wide at the base, weighs 65 tons (without the flag), and is sunk into a 550-ton block of concrete that is 40 feet (12.19m) deep, convert|8|ft|m wide and reinforced by steel rods. The flag is convert|120|ft|m by 60 feet (36.58 x 18.29 meters), or 7,200 square feet (668.9 square meters). Each star is 4 feet (1.219m) high and each stripe is 4 1/2 feet (1.37m) wide. It weighs 300 pounds (136 kg). [cite news| first=Eric| last=LaRose| work=The Sheboygan Press| title=Acuity raises Old Glory Atop tallest flagpole in the nation| date=| url=http://www.sheboygan.lib.wi.us/pages/acuity.html] This flag and flagpole outdid an earlier Acuity record, a flag raised June 2, 2003, atop a 150 foot (45.72 m) flagpole. The old pole toppled over due to stress during high winds, almost falling onto nearby . The new flagpole was redesigned, and placed much farther from the highway. That flagpole is currently being replaced as of October 2007, with a new pole which has an access ladder inside to access the navigation beacon and is better able to tolerate local weather conditions [cite web| title=Acuity Raises Largest Symbol of Freedom in Wisconsin| url=https://www.acuity.com/whatsn03.nsf/pages/flag.htm| publisher=Acuity] [cite web| title=Dismantling of flagpole begins| url=http://www.sheboygan-press.com/apps/pbcs.dll/article?AID=/20071004/SHE0101/710040567/1062/SHEnews | publisher=""] . In 2007 Acuity took the flag pole down to replace with a new one, after several failed attempts to replace the flag pole Acuity finally gave up and removed the tallest flagpole in the United States.
*In April of 1896 the schooner "Lottie Cooper" was wrecked just off Sheboygan in a gale. [cite web| title=Significant Chronology for the Lottie Cooper| url=http://www.baillod.com/shipwreck/projects/sheboygan/chron.htm] The wreckage was found buried in the harbor during the construction of the Harbor Centre Marina. The wreckage was recovered and is now on display in DeLand Park, along Sheboygan's lakefront. The free display is the only one of its kind on the . [cite web| title=Detailed Information for Lottie Cooper| publisher=Wisconsin Historical Society| work=Wisconsin's Maritime Trails| url=http://www.maritimetrails.org/visit_trails_details.cfm?RESOURCEID=44]
* Sheboygan was recognized by as "The Best Place to Raise a Family" in the United States in 1995. [cite web| title=The Sheboygan Press| publisher=Gannett| url=http://www.gannett.com/about/map/ataglance/sheboygan.htm]
* In the film 'Some Like It Hot' Josephine and Daphne (Tony Curtis and Jack Lemmon) claim to have studied at the Sheboygan Conservatory of Music.
* In the film 'Home Alone' the polka band that gives Kevin's Mom a ride home say they are "big in Sheboygan."
* A mysterious photo published by the newspaper the "" has been doing the rounds on the web in the beginning of the 2007. Believed to be taken during the 1890s, it features an elegantly dressed man sitting down in the middle of a major intersection - on a dead horse. [cite web| title=The Sheboygan Press| publisher=Gannett| url=http://www.sheboygan-press.com/apps/pbcs.dll/article?AID=/20061215/SHE0101/612150642/1973]
*During a nationally televised NBC Sunday Night Football game on October 7th, 2007 between the Green Bay Packers and Chicago Bears, well-known football commentator John Madden made the following comment: "Well you see when Brett Favre gets the ball he is going to be Brett Favre and throw that ball all the way to Sheboygan. Heh, funny thing see when I always think of Wisconsin I think of Sheboygan. You know when you're in Wisconsin when Brett Favre is Brett Favre and Sheboygan. Yeah where you from? Sheboygan." - John Madden; John Madden also mentioned during that game the only place you can kick the ball to where Devin Hester won't return it is Sheboygan. "If you Kick it to Sheboygan I don't think he can run it back from there"

*The town is referenced in "The Creature that ate Sheboygan" by Leeds based Dirty Rockabilly Blues band, Aces & Eights.

*The chicken in "Surfs Up" is from Sheboygan, and there is a short clip of him surfing in Sheboygan.