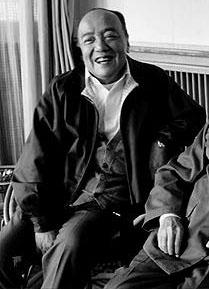 Yang was born in Shuangjiang, , near the city of in Sichuan, and studied at Chengdu Higher Normal School and its affiliated secondary school in 1920-25, and then returned to Chongqing. His older brother, Yang Yangong was one of the founding Executive Committee members of the CCP in Sichuan, and undoubtedly had an influence on Yang Shangkun’s ideological orientation.

The original intention of the after sending him back to was to have him help , but during the , Yang defected to 's camp by supporting Mao at the , thus earning Mao's trust. Since 's policy caused catastrophic failure for the Chinese communists, the was forced to accept the leadership change of the Chinese Communist Party, but unwilling to let Mao and other local factions take control, the appointed a new leader of the Chinese communist party , a former political rival of , but was still Soviet-trained and much more pro- than Mao and his followers who had never been to . Yang Shangkun and other communists who were trained in the were ordered and expected to support this new appointee who once opposed .

However, the hope of the was crushed once again when many of the former- trained Chinese communist cadres such as Yang Shangkun and once again supported Mao instead of the appointee the had preferred. During the latter stage of the , Yang was with 's force, because the preferred Zhang over Mao and hoped the Zhang would have support from the Chinese communists who were in the former-. However, Yang defected again to 's side when and disagreed on the destination and Zhang led his force to the south. After fled Zhang's headquarter with all of the maps and code books to Mao's camp, Yang and another colleague also fled from 's headquarter with top secret documents, and they were forced to hide in order along the way to escape the Zhang's cavalry sent to capture them, and eventually they made it safely to Mao's headquarter with these important documents from Zhang's headquarter, and thus Mao's trust in Yang Shangkun was further strengthened. However, Yang's wife was forced to march with Zhang's force and the couple did not reunite until years later when Zhang's force finally returned to the communist base in after Zhang's disastrous failure which cost 75% of his force.

He held a senior position in the Central Committee of the (CPC) from 1956 to 1966, but lost Mao's favor when he voiced his opposition to Mao's policy and supported and in their attempt to salvage China from the depths of the movement after witnessing the disastrous result of Mao's . As a result, Yang Shangkun was demoted during the , during which he was struggled by the , and he was accused of planting to spy on Mao, the same accusation shared by , and he was not rehabilitated until 1978, after which was elected to the Politburo in 1982. Such experience only strengthened Yang's support for the as well as his friendship with , but in comparison to , , , and other reformers, Yang was far less enthusiastic about political reform. However, Yang's attitude of aggressive support for the and conservative stand against the political reform at the same time just fit perfectly with 's view and thus earned him further trust from Deng. Many critics of Yang accurately point out that one of the main reasons of his strong support of the is that his children were assigned important posts in those state-owned enterprises that monopolized the particular market segments in the areas they dominated, and thus benefitted hugely from the economic reform, accumulating great wealth via legal means, thanks to the state run monopoly.

In 1988, Yang was appointed the . Under the constitutional conventions of the 1982 Constitution, the President's role was largely symbolic, with formal executive power wielded by the Premier and the . In practice, state and party leaders still deferred to .

However, Yang's role during the caused a fundamental shift in this arrangement. Yang was at first sympathetic to the students and he sided with . As the PRC president, he even praised Zhao's decision by claiming that “ [Zhao] Ziyang’s notion of pacifying the student movement through democracy and law is good and seem quite workable right now.” However, after learning the paramount leader 's intention to crack down on the students, Yang quickly changed his position and used his authority as President to declare martial law, and in cooperation with , who was the Chairman of the Central Military Commission, to order the June 1989 military crackdown against student pro-democracy demonstrators in , . His nephew, , commanded the highly disciplined 27th Group Army, which was brought in from province to suppress the demonstrators.

Extremely influential in the , he was removed by in 1992 for attempting to replace as party leader. He was succeeded as President by .

He is considered as one of the . He is a cousin of .