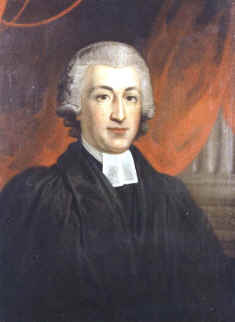 James Woodforde was born at the Parsonage, , , on . In adulthood he led an uneventful, unambitious life as a clergyman of the : a life unremarkable but for one thing - for nearly 45 years he kept a recording an existence the very ordinariness of which provides a unique insight into the everyday routines and concerns of 18th century rural .

The sixth child of the Revd Samuel Woodforde, rector of Ansford and vicar of , and his wife Jane Collins, James was one of four brothers (one of whom died in infancy) and the only one to attend public school - , and university - . He was admitted to Winchester as a scholar in 1752 and enrolled at in 1758, migrating to New College in the following year. His diary begins with the entry for - "Made a Scholar of New College". [J. Beresford, The Diary of a Country Parson, Vol. 1, p. 11 ]

Woodforde was ordained and graduated in 1763, became M.A. in 1767 and B.D. in 1775. He appears to have been a competent but uninspired student and the portrait he provides of Oxford during his two periods of residence as scholar and fellow (from 1758-1763 and from 1773-1776) only confirm 's famously damning opinion that it was a place where the dons' "dull and deep potations excuse the brisk intemperance of youth". [Memoirs of my Life and Writings' from Lord Sheffield (ed.) Miscellaneous Works]

Upon leaving the university in 1763, Woodforde returned to Somerset where he worked as a , mostly for his father, for ten years. From October 1763 to January 1764 he was the curate at .

In Norfolk, his social life was more limited, but he enjoyed the fellowship of the local clergy who took it in turns to entertain one another to dinner - "our Rotation Club". [Many references to the Rotation Club, beginning with entry for 13 Jan. 1776 -see R.L. Winstanley (ed.), The Diary of James Woodforde, Vol. 7, 1776-1777, p.103] Because he always recorded what was provided for dinner, which very occasionally was an elaborate banquet, he is often wrongly characterised as a glutton. Among the gentry in the eighteenth century, it was a matter of pride to provide a variety of dishes. Because Woodforde recorded them all, does not mean that he ate from them all.

Woodforde also provides a meticulous record of his accounts. This does not mean that he was either a miser or a spendthrift; he was advised to do so by his father. The daily entries are also accompanied by notes. The Diary also provides a wonderfully full account of the small community in which the diarist lived - of the births and deaths, comings and goings, illnesses and annual celebrations.

The Diary not only covers 'the Squire and his Relations,' but also the rector's servants, the farmers and labourers, carpenter and inn-keeper, parish-clerk and many others. As a churchman, Woodforde himself was conscientious by the standards of his time, charitable and pious without being sanctimonious and again typical of his day, deeply suspicious of enthusiasm.

The value of the Diary to the historian lies in the wealth of primary source material it provides, while the general reader can bring from it the authentic flavour of eighteenth century English country life.

The five volume edition of the Diary has one flaw: it is only a selection, and, unaware of how popular it would prove - with , and among many thousands more - Beresford's selected his first volume from nearly half of the entire Diary. [ See Virginia Woolf, The Common Reader, Second Serties, Chap. 9 - Two Parsons; R.L. Hart-Davis (ed.), Siegfried Sassoon:Letters to Max Beerbohm, pp.53-57] The subsequent volumes, each covering between four and six years, are more complete. A definitive edition has been published by the Parson Woodforde Society. The MS Diary, consisting of 72 notebooks and 100 loose sheets, is deposited in the , Oxford.

The Revd James Woodforde was one of several Woodforde diarists. His niece Nancy, and his `Nephew Bill's' three daughters all kept diaries, as did a number of his predecessors. Others were painters, including his nephew RA. Hence, a remarkably detailed account of his family exists, and is now documented online. [ [http://www.woodforde.co.uk "Woodforde family information and website"] accessed ]