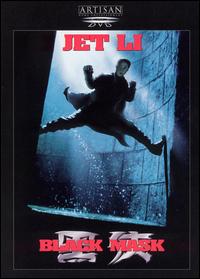 "Black Mask" (zh-t|t=黑俠) is a 1996 Hong Kong action film starring , , and . It was directed by Daniel Lee and produced by and his production company .

The film concerns a man named Tsui Chik (Simon in the American version), who tries to lead a quiet life as a . However, he is really a former test subject for a highly secretive project and part of a unit dubbed "701." When he discovers that other test subjects have begun a violent crime spree that the police are helpless to stop, he sets out to stop them himself by donning a disguise and using the alias of "Black Mask". Having lost the ability to feel pain due to experiments performed on him by the military, Black Mask is highly invulnerable.

In the film, in homage to "", Black Mask wears a domino mask and chauffeur's cap in the same style as Kato from the series. Jet Li is often mentioned as a leading candidate to play Kato in a future big budget "Green Hornet" film.

At the box office, "Black Mask" grossed a moderate HK $13,286,788 during its Hong Kong box office run. On May 14, 1999, a recut version of the film was released in 979 North American theatres. It grossed a reasonable US $4,449,692 ($4,545 per screen) in its opening weekend, and grossed a total of US $12,504,289. "Black Mask" was released in the in to cash in on Jet Li's recent appearance in the Hollywood film "". This version dubbed the original Cantonese dialogue into English and re-edited the film, swapping scenes around and excising 10 minutes of footage.