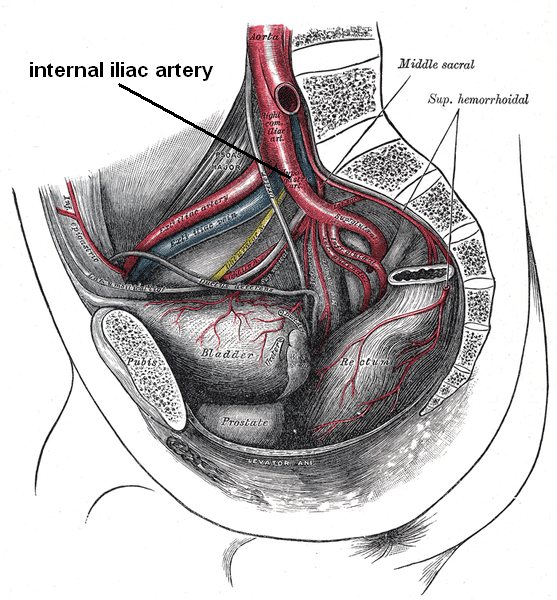 The internal iliac artery supplies the walls and of the , the , the , and the medial compartment of the .

It is a short, thick vessel, smaller than the , and about 4 cm in length.

It arises at the bifurcation of the , opposite the lumbosacral articulation (L5/S1 intervertebral disc), and, passing downward to the upper margin of the , divides into two large trunks, an anterior and a posterior.

The following are relations of the artery at various points: it is posterior to the , anterior to the , the , and the ; near its origin, it is medial to the , which lies between it and the ; it is above the .

The following are the branches of internal iliac artery. Because it is variable, a listed artery may not be a direct branch, but instead might arise off a direct branch.

In the , the internal iliac artery is twice as large as the , and is the direct continuation of the .

It ascends along the side of the bladder, and runs upward on the back of the anterior wall of the abdomen to the , converging toward its fellow of the opposite side.

Having passed through the umbilical opening, the two arteries, now termed umbilical, enter the , where they are coiled around the umbilical vein, and ultimately ramify in the .

At birth, when the placental circulation ceases, the pelvic portion only of the umbilical artery remains patent gives rise to the superior vesical artery (or arteries) of the adult; the remainder of the vessel is converted into a solid fibrous cord, the (otherwise known as the obliterated hypogastric artery) which extends from the pelvis to the umbilicus.

In two-thirds of a large number of cases, the length of the internal iliac varied between 2.25 and 3.4 cm.; in the remaining third it was more frequently longer than shorter, the maximum length being about 7 cm. the minimum about 1 cm.

The place of division of the internal iliac artery varies between the upper margin of the and the upper border of the .

The right and left hypogastric arteries in a series of cases often differed in length, but neither seemed constantly to exceed the other.

*
*
*
* [http://www.mrcog-wiseowl.com/assets/images/internal_iliac_artery_web.jpgIllustration at wiseowl.com]
*
* [http://www.anatomyatlases.org/AnatomicVariants/Cardiovascular/Images0001/0068.shtml "Variation in Origin of the Parietal Branches of internal iliac artery based on a study of 169 Specimens (108 males and 61 females)." at anatomyatlases.org]
*
* (NormanAnatomyFig|pelvicarteries)