For the monastery in Valladolid, see Convent of Las Descalzas Reales (Valladolid).

The Monastery of Las Descalzas Reales is a royal monastery situated in Madrid, Spain, administered by the Patrimonio Nacional.

El Monasterio de las Descalzas Reales, literally the Monastery of Barefeet Royals, resides in the former palace of King Charles I of Spain and Isabel of Portugal. Their daughter, Joan of Austria, founded this convent of nuns of the Poor Clare order in 1559. Throughout the remainder of the 16th century and into the 17th century, the convent attracted young widowed or spinster noblewomen. Each woman brought with her a dowry. The riches quickly piled up, and the convent became one of the richest convents in all of Europe. Tomás Luis de Victoria, Spain's finest Renaissance composer, worked at the convent from 1587 to the end of his life in 1611.

The demographics of the convent slowly changed over time, and by the 20th century, all of the sisters were in poverty. The convent maintained the riches of its past, but it was forbidden to auction any of the items off or spend any of the money it received from the dowries. The state intervened when it saw that the sisters were poor, and the pope granted a special dispensation to open the convent as a museum in 1960.

While in the past, the treasures of the monastery were not visible, today the monastery houses only a few nuns, and the site is a well-visited national monument. The noblewomen's dowries were often invested into relics and their bejeweled exhibition pieces. Among the many relics on display are putatively pieces from Christ's cross, and the bones of Saint Sebastian. Among the priceless art masterpieces are Titian's Caesar's Money, tapestries woven to designs by Rubens, and works by Hans de Beken and Brueghel the Elder. 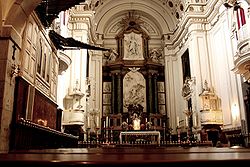 The original architect of the church was Antonio Sillero. The facade was designed by Juan Bautista de Toledo in 1559; who also helped in the roofing of the church. Parts of the altar, choir, and sacristy, were designed by Juan Gómez de Mora in 1612. Gaspar Becerra in 1562 completed the main retablo of the altar, which was considered his master work. Unfortunately, this retablo was destroyed by fire in 1862, along with many of the paintings and frescoes by Juan Pantoja de la Cruz. In 1863 the altar was replaced by one commissioned in 1716 by Philip V of Spain to conmemorate the beatification of the French jesuit Jean-François Règis, including canvases by Michel-Ange Houasse . It has a sculpted relief of the Apotheosis of Juan Francisco Régis, by Camillo Rusconi. The lateral panels were sculpted by Jose Bellver. The recumbent statue of the Jesuit was sculpted by Agostino Cornacchini. A chapel contains the marble orant statue of Joan of Austria by either Pompeo Leoni or Crescenci.