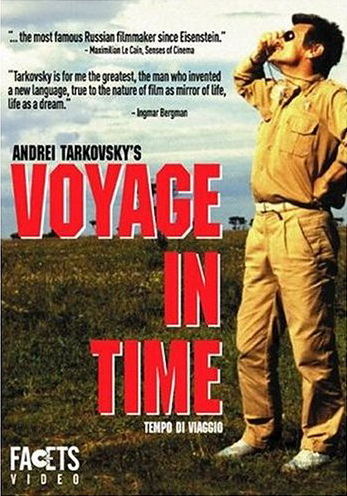 "Voyage in Time" ( _it. Tempo di Viaggio) is a 63-minute feature documentary that documents the travels in Italy of director in preparation for the making of his film "".

Tarkovsky, a Russian, who had often expressed his strong spiritual and emotional connection to Russia through his films, left the country in 1983 never to return.

He came to believe that films should be made in the style of a documentary. However, Tarkovsky's idea of a documentary is in many respects very different from that generally understood by , especially in the . Indeed, the slow and captivating progression of images, places and people in "Voyage in Time" is profound and artistic, and instead of communicating a political message or presenting a factual account, the short film quietly and with great sensitivity observes the process by which the mind becomes attuned to a new environment in which the person finds his niche. Watching the film feels like walking around a gallery, as one slowly becomes more sensitive to the infinite variety and subtleties of the paintings hanging on the wall and the patterns in the mind of the observer begin to form.

Several dozen other documentaries about Andrei Tarkovsky have been produced. Most notable are "" by , "" by , "The Recall" by Tarkovsky's son Andrei Jr., and "Regi Andrej Tarkovskij" by Michal Leszczylowski, the editor of Tarkovsky's "The Sacrifice". Tarkovsky has also been featured in numerous documentaries about the history of cinema or the craft and art of filmmaking. [cite web|url=http://www.ucalgary.ca/~tstronds/nostalghia.com/TheDocumentaries/Documentaries.html|title=Significant Documentaries|last=Trondsen|first=Trond S.|coauthors=Jan Bielawski|publisher=Nostalghia.com – An Andrei Tarkovsky Information Site|accessdate=2008-09-01]