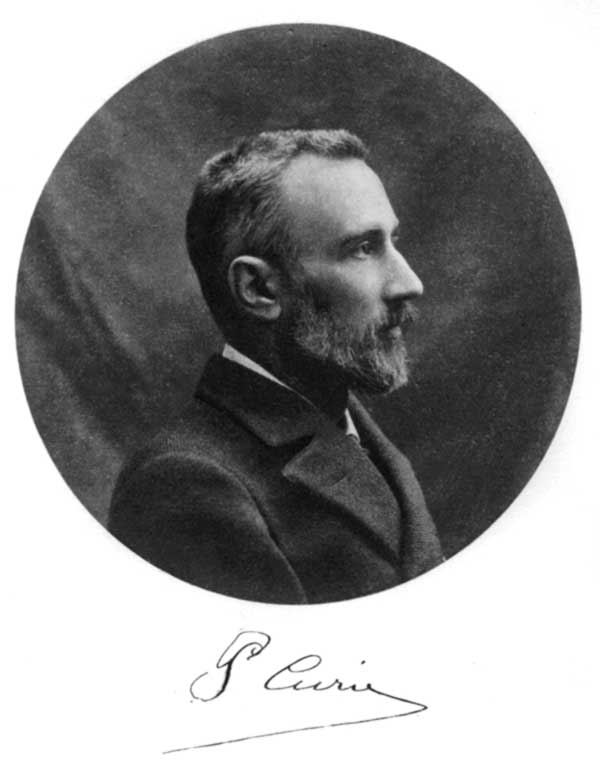 He shared the 1903 in physics with his wife, Maria Skłodowska-Curie (Marie Curie), and , "in recognition of the extraordinary services they have rendered by their joint researches on the radiation phenomena discovered by Professor Henri Becquerel."

Born in , , Pierre was educated by his father, and in his early teens showed a strong aptitude for mathematics and geometry. By the age of 18 he had completed the equivalent of a higher degree, but did not proceed immediately to a doctorate due to lack of money. Instead he worked as a laboratory instructor.

In 1880, Pierre and his older brother Jacques demonstrated that an electric potential was generated when crystals were compressed, i.e. . Shortly afterwards, in 1881, they demonstrated the reverse effect: that crystals could be made to deform when subject to an electric field. Almost all digital electronic circuits now rely on this phenomenon in the form of .

Prior to his famous doctoral studies on magnetism he designed and perfected an extremely sensitive for measuring magnetic coefficients. Variations on this equipment were commonly used by future workers in that area. Pierre Curie studied , , and for his doctoral thesis, and discovered the effect of on paramagnetism which is now known as . The material constant in Curie's law is known as the Curie constant. He also discovered that ferromagnetic substances exhibited a transition, above which the substances lost their ferromagnetic behavior. This is now known as the .

Pierre formulated what is now known as the "Curie Dissymmetry Principle": a physical cannot have a dissymmetry absent from its efficient . For example, a random mixture of sand in zero gravity has no (it is ). Introduce a , then there is a dissymmetry because of the direction of the field. Then the sand grains can ‘self-sort’ with the density increasing with depth. But this new arrangement, with the directional arrangement of sand grains, actually reflects the dissymmetry of the gravitational field that causes the separation.

Pierre worked with his wife Marie Curie in isolating and . They were the first to use the term "," and were pioneers in its study. Their work, including Marie's celebrated doctoral work, made use of a sensitive piezoelectric constructed by Pierre and his brother Jacques.

Pierre and one of his students made the first discovery of , by identifying the continuous emission of from particles. He also investigated the radiation emissions of radioactive substances, and through the use of magnetic fields was able to show that some of the emissions were positively charged, some were negative and some were neutral. These correspond to alpha, beta and .

The is a unit of radioactivity (3.7 x 1010 decays per second or 37 gigabecquerels) originally named in honour of Pierre Curie by the Radiology Congress in 1910, after Pierre's death. Subsequently, there has been some controversy over whether the naming was in honour of Pierre, Marie, or both. [cite web | author = Paul W. Frame | title = How the Curie Came to Be | url = http://www.orau.org/ptp/articlesstories/thecurie.htm | accessdate = 2008-04-30]

Pierre and Marie Curie's daughter and their son-in-law were also physicists involved in the study of radioactivity, and were also awarded the Nobel prize for their work. Their other daughter Ève wrote her mother's biography. His granddaughter is a of nuclear physics at the and his grandson, , who was named after him, is a noted biochemist.

Pierre died as a result of a carriage accident in a rain storm while crossing the "Rue Dauphine" in on 19 April 1906. Both Pierre and Marie were enshrined in the of the Panthéon in Paris in April 1995.