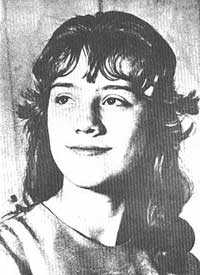 Sylvia Marie Likens (January 3, 1949 - October 26, 1965) was an American murder victim from Indianapolis. She was tortured to death by (née Van Fossan), Gertrude's children, and other young people from their neighborhood. Her parents, carnival workers, had left Likens and her sister Jenny in the care of the Baniszewski family three months before her death in exchange for twenty dollars a week. Baniszewski, two of her children, Paula and John, and two neighbor youths, Coy Hubbard and Richard Hobbs, were charged and convicted of the crime. Her torture and murder were described by the prosecutor in Baniszewski's trial as "the most terrible crime ever committed in the state of Indiana."

Sylvia Likens was the third child of carnival workers Betty and Lester Likens. Her birth came between two sets of , Diana and Daniel (two years older), and Jenny and Benny (one year younger). The marriage of the Likens was unstable and the family moved many times. Likens was often boarded out or forced to live with relatives while her parents were working. [ [http://www.trutv.com/library/crime/notorious_murders/young/likens/3.html "The Torturing Death of Sylvia Marie Likens: Foster Care".] Crime Library.com.]

In 1965, Sylvia and her sister Jenny, who was disabled from ,

Abuse and death of Sylvia Likens

Baniszewski, described by the "" as a "haggard, underweight tic"

Sylvia Likens in particular became a target of . Baniszewski accused her of stealing candy she had bought from a grocery store and humiliated her when she admitted that she had once had a boyfriend. She kicked Likens in the groin and accused her of being pregnant. Paula Baniszewski, who was in fact pregnant at the time, became enraged and knocked Likens onto the floor. Likens became convinced that she was pregnant, although medical examination proved that she was not and could not have been. [ [http://www.trutv.com/library/crime/notorious_murders/young/likens/5.html "The Torturing Death of Sylvia Marie Likens: A Dubious Start."] Crime Library.com]

Likens allegedly retaliated by spreading rumors at their high school that Paula and Stephanie Baniszewski were s. That supposedly prompted Stephanie's boyfriend, Coy Hubbard, to physically attack Likens. Mrs. Baniszewski encouraged Hubbard and other neighborhood children to torment Likens, including, among other things, putting cigarettes out on her skin and forcing her to remove her clothes and insert a Coke bottle into her .

After Likens admitted stealing a gym suit, without which she was unable to attend gym class, Baniszewski pulled her out of school and did not allow her to leave the house. When Likens urinated in her bed, she was locked in the cellar and forbidden to use the . Later, she was forced to consume and . Baniszewski began to carve the words "I'm a prostitute and proud of it!" into Sylvia's stomach with a heated needle, although Richard Hobbs finished the carving when Baniszewski couldn't.

Likens attempted to escape a few days before her death. As punishment, she was tied in the basement and given only crackers to eat. On October 26, 1965, after multiple beatings, she died of , shock, and .

As Stephanie Baniszewski and Richard Hobbs realized that Sylvia was not breathing, Stephanie attempted to give Sylvia mouth-to-mouth resuscitation before realizing it was a lost cause. [http://www.trutv.com/library/crime/notorious_murders/young/likens/13.html]

Baniszewski sent Richard Hobbs to call the police from a nearby . When they arrived, she handed them a letter she had forced Sylvia to write a few days previously, addressed to her parents. This letter stated that she had agreed to have sex with a group of boys in exchange for money, they dragged her away in their car, beat her up, burned her multiple times, and carved the inscription into her skin. Before the police left, however, Jenny Likens approached them, saying: "Get me out of here and I'll tell you everything." [ [http://www.trutv.com/library/crime/notorious_murders/young/likens/13.html "The Torturing Death of Sylvia Marie Likens: The Letter Before End".] Crime Library.com.]

During the highly-publicized trial, Baniszewski denied responsibility for the death, pleading . She claimed that she was too distracted by her ill health and depression to control her children. Attorneys for the young people on trial (Paula and John Baniszewski, Richard Hobbs, and Coy Hubbard) claimed that they had been pressured by Baniszewski. When Marie Baniszewski, Gertrude's eleven-year-old daughter, was called to the stand as a witness for the defense, she broke down and admitted that she had been forced to heat the needle with which Hobbs carved Sylvia Likens' skin and that she had seen her mother beating and forcing Sylvia into the basement. In his closing statement, Baniszewski's lawyer said: "I condemn her for being a murderess... but I say she's not responsible because she's not all here!" and tapped his head. [ [http://www.trutv.com/library/crime/notorious_murders/young/likens/16.html "The Torturing Death of Sylvia Marie Likens: Drama in the Court Room".] Crime Library.com.]

The boys would spend two years in prison. In 1971, Paula and Gertrude Baniszewski were granted another trial. Paula pleaded guilty to voluntary manslaughter and was released two years later.

Gertrude Baniszewski changed her name to Nadine van Fossan and moved to , where she died of in 1990. When Jenny Likens, who was then married and living in , , saw her in the newspaper, she clipped it out and mailed it to her mother with the note: "Some good news. Damn old Gertrude died. Ha ha ha! I am happy about that." Jenny Likens Wade died of a heart attack on June 23, 2004 at the age of 54. [Caleca, Linda Graham. [http://www2.indystar.com/library/factfiles/crime/history/likens_sylvia/articles/040399.html "Suitcase of Sorrow."] "Indianapolis Star". Library FactFiles.]

After the Jonesboro school massacre, John Baniszewski, now known as John Blake, gave a statement claiming that young criminals were not beyond help and describing how he had managed to turn his life around. [ [http://www.trutv.com/library/crime/notorious_murders/young/likens/18.html "The Torturing Death of Sylvia Marie Likens: In Memoriam".] Crime Library.com.]

* Feminist wrote a semi-fictional book relating to the incident, "The Basement: Meditations on a Human Sacrifice". Millett stated in an interview that the murder of Sylvia Likens "is the story of the suppression of women. Gertrude seems to have wanted to administer some terrible truthful justice to this girl: that this was what it was to be a woman."