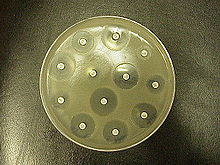 In Kirby-Bauer testing, white wafers containing antibiotics are placed on a plate of bacteria. Circles of poor bacterial growth surround some wafers indicating susceptibility to the antibiotic.

This along with the rate of antibiotic diffusion are used to estimate the bacteria's sensitivity to that particular antibiotic. In general, larger zones correlate with smaller minimum inhibitory concentration (MIC) of antibiotic for that bacteria. This information can be used to choose appropriate antibiotics to combat a particular infection.