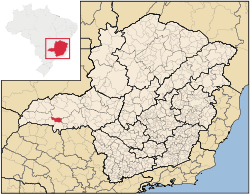 Location of Comendador Gomes in the state of Minas Gerais

Comendador Gomes is located at an elevation of 557 meters in the west of the area known as the Triângulo Mineiro about 15 km west of the Transbrasiliana highway—Br-153. It belongs to the statistical microregion of Frutal. Neighboring municipalities are:

The most important economic activities are cattle raising, commerce, and agriculture. The GDP in 2005 was R$ 55,658,000. Comendador Gomes is in the top tier of municipalities in the state with regard to economic and social development. As of 2007 there were no banking agencies in the town. There was a well-developed retail infrastructure serving the surrounding area of cattle and agricultural lands. In the rural area there were 369 establishments occupying about 1,000 persons. 176 of the farms had tractors, a ratio of one in two. There were 309 automobiles in all of the municipality, about one for every 10 inhabitants.

Comendador Gomes is an important agricultural producer. There were 61,000 head of cattle in 2006, of which 12,000 head were dairy cows. In permanent crops there are 1,128 ha. planted, while in perennial crops 1,697 ha. were planted. The crops with a planted area of more than 100 hectares were: