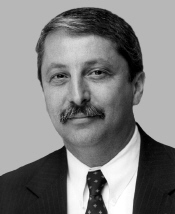 Samuel "Sam" Gejdenson (born , ) is a former United States Representative for the .

Born in a displaced persons camp in , , Gejdenson was the child of a Belarussian father and Lithuanian mother. Gejdenson grew up in on a dairy farm. He attended for two years and finished at University of Connecticut. From 1970 to 1973, he worked for the FIA Company. He was elected as a Democrat to the that same year and served two terms. He then worked as the president of the Montessori School in .

Gejdenson won a seat to the in November 1980. During his tenure there was strong disagreement whether or not Gejdenson was a strong advocate for the submarine manufacturing base located in his congressional district. Twice Gejdenson was offered a seat on the Armed Services Committee, both of which he refused. Gejdenson's supporters claimed the congressman didn't need to be on the committee to be effective.

Gejdenson served as Chairman of Subcommittee on Oversight and Investigations of the House Interior Committee (now House Resources Committee). In that capacity, he conducted oversight over the Nuclear Regulatory Commission and the Bureau of Indian Affairs. Beginning in 1989, Gejdenson assumed the Chairmanship of the Subcommittee on International Economic Policy and Trade of the House Foreign Affairs Committee (now International Relations Committee).

Gejdenson focused his subcommittee's work on promoting American exports and streamlining export controls to facilitate high-tech exports. In 1999, Gejdenson became the Ranking Democratic Member of the full International Relations Committee, where he was a key player in writing legislation cracking down on international human trafficking and to authorize the activities of State Department.

During his tenure, Gejdenson had a number of very close campaigns for re-election. He was nearly defeated by Republican Roberta Koontz in 1984 and again by State Senator Edward W. Munster in 1992. In 1994, as the Democrats lost control of the House of Representatives, a Gejdenson-Munster rematch produced only a 21-vote victory for Gejdenson. In November 2000, Gejdenson lost his bid for re-election to the to State Representative . Three major issues may have caused this defeat. (American Israel Political Action Committee) opposed his re-election despite the fact that he was Jewish. It was alleged that Gejdenson had moved out of the district. It was also alleged by author Jeffrey Benedict that Gejdenson had been an advocate of letting the Indians build the . Gejdenson now resides in Branford, CT and is now involved in international trade with his own company, . He endorsed Joe Courtney in the 2006 race for the seat he once held, in which Courtney defeated Simmons in an extremely close race.

###@@@KEY@@@###succession box
before=
title=United States Representative for the 2nd Congressional District of Connecticut
years=1981&ndash;2001
after=