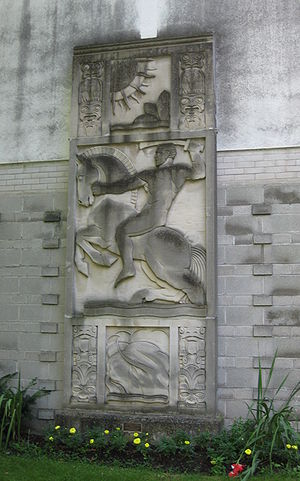 Stone carvings from the building are preserved at the Guild Inn

The old Globe and Mail building was an impressive example of streamlined modern building at the northeast corner of King and York, Toronto, built in 1937 and demolished in 1974 to make way for the First Canadian Place complex. The current Globe and Mail headquarters is located on Front Street near Spadina Avenue.

The main door of the original building was retained and installed at the Globe and Mail's current home on Front Street. Additional sculptural elements from the structure may be found at the Guild Inn in Scarborough.