The Battlestar "Galactica" is a in the original and re-imagined "".

The Twelve Colonies of Man in the original television series built a number of Battlestars during their thousand-year war with the Cylons, whose battleships are known as Basestars.

One of an undisclosed total number of s constructed by the Twelve Colonies of Man. Eight other Battlestars are specifically named in the series: ("Acropolis", "Atlantia", "Columbia", "Pacifica", "Pegasus", "Rycon", "Solaria", and "Triton"). "Galactica" represents the Colonial planet , and is crewed mostly by Capricans. "Galactica" was built 500 before the close of the Thousand Yahren War (and the start of the television series). It is believed to be the only Battlestar to survive , until Battlestar "Pegasus" is found.

Of the other ships, it is known that the "Atlantia", "Acropolis", "Pacifica" and "Triton" are destroyed at the Battle of Cimtar in "Saga of a Star World". Battlestar "Columbia" is stated in the episode "Gun on Ice Planet Zero", but it is said to also have been destroyed at Cimtar by a Centurion. The "Rycon" is mentioned in passing in the episode "Take the Celestra" as the ship of Captain Kronus. "Pegasus" is encountered in "The Living Legend".

"Galactica" is commanded by . It has a complement of about 150 Vipers: a mixture of its own, some from the other battlestars at the Peace Conference, and a large number of fighters from the "Pegasus".

Novelizations based on the original series, various comic books, and other sources have named several other Battlestars, including "Bellephon", "Cerberus", "Olympia", and "Prometheus". 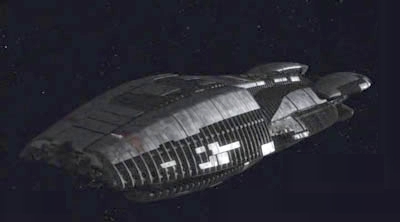 
One of the first twelve s built, "Galactica" represents the Colonial planet . In the re-imagined series, there were about 120 s in service prior to the Cylon attack.

"Galactica" entered service in the early years of the , under the command of Commander Nash. During her service, "Galactica" formed a part of Battlestar Group 75 (BSG 75), a Colonial force described by series creator as a mixed-force of vessels somewhat similar to a US Navy .

Like any of her sister ships, which may have survived the original Cylon War, "Galactica" underwent refits and upgrades (for example, at the end of her career she was equipped with the latest Mark VII Viper space superiority fighter). However, her computer systems were neither networked nor integrated by any of her commanding officers, up to and including her current commander, .

Due to this lack of network integration at the time of the Cylon attack, "Galactica" was immune to the infiltration program used by the Cylons to disable Colonial vessels and defense systems, using the Command Navigation Program (CNP), developed by Dr. and subverted by Cylon operative Number Six as a back door into such systems.

At the time of the Cylon Attack, "Galactica" was 50 years old and she was undergoing formal decommissioning from the Colonial Fleet following her retirement as an operational vessel. She had been due to become a ; a combined living museum commemorating the Cylon War and educational center. Due to its age, the ship is unofficially known as "The Bucket" by the crews of both "Pegasus" and "Galactica".

Since the Cylon attack, in keeping with the concept of the original 1978 series, "Galactica" has become both protector and provider to a small fleet of civilian vessels searching for the legendary planet Earth.

"Galactica" took heavy damage during its raid on New Caprica, and her hull is now clearly darker with burn marks and missile hits. The starboard hangar deck, which had been converted into a museum prior to "Galactica"'s intended decommissioning, was used to house civilian refugees from New Caprica after the evacuation, and earned the nickname "Camp Oilslick".

In the episode "The Passage" "Galactica" was once again used to house fleet passengers during the trip through the intense gas cloud, leaving the fleet vessels to be flown by skeleton crews with radiation medication. It is unclear as to whether the passengers have been returned to their vessels between "The Passage" and "The Eye of Jupiter".

In the episode "", 300 additional passengers are shown being moved to the starboard hangar deck, and the area was given the name "Dogville" by the "Galactica" crew. Upon arriving, each passenger was checked for medical issues by civilian doctors and medical staff. Also now housed in the starboard hangar deck is a makeshift bar called "Joe's". It is located behind a storage area, and has a bumper-pool table, Pyramid arcade area, and a heavily damaged Mark II Viper hanging above the bar. It was first seen in the episode "".

"Galactica" has been seen taking hits from nuclear weapons. Though the ship suffered damage, she is still operational. It is unclear exactly how well rated the Cylon nuclear weapons are versus "Galactica"'s armor. Also, as the nukes detonated outside of the vessel, most of the energy would have been directed and attenuated out into the area of least resistance: space.

At the onset of the series, "Galactica"'s last operational squadron of Mark VII vipers participated in the decommissioning ceremony before departing the ship. The squadron was re-directed to intercept a group of cylon fighters and was subsequently disabled by the cylon computer virus and destroyed. The museum display Vipers, mostly Mark II's, were pressed into service to defend the ship, and these, along with a small number of Mark VII's (presumably refugees from other battlestars or spares broken out from storage) comprised the ship's fighter compliment until the arrival of the "Pegasus" midway through the second season. "Pegasus" possessed construction facilities and flight simulators that allowed it to build and train new Mark VII vipers to strengthen the squadrons of both ships. When "Pegasus" was destroyed during the liberation of New Caprica, her nearly intact squadrons were transferred to "Galactica", giving the latter a full compliment of Vipers. By the time of the episode , there were more Vipers available than qualified pilots, and trainees (known as 'nuggets') were pressed into service to defend the fleet.