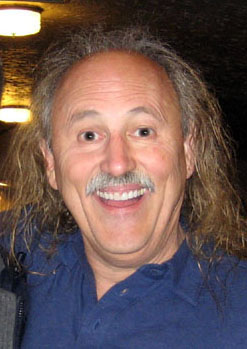 Gallagher (born Leo Anthony Gallagher on , at ) is an American and , most popularly known for smashing s as part of his act.

After graduating from the with a ing degree in 1969, Gallagher began working as comic/musician Jim Stafford’s . Stafford and Gallagher went out to in 1979 and Gallagher decided to take the stage himself. He began honing his own comedy act while hanging out at both and the Ice House.

Gallagher was one of the most popular and recognizable American comedians during the early 1980s. He produced at least one special a year from 1981 to 1987, all of which were carried by Showtime cable network and then re-broadcast numerous times throughout the year. To date he has done 16 specials.

His signature sketch is the “Sledge-O-Matic,” a large wooden mallet that Gallagher uses to smash a variety of objects, including computer keyboards, containers of , cartons of , tubes of , ("I guess it does"), s, and, most famously, s. Given the messy nature of this portion of his act, it is usually saved for the finale of his shows. Show attendees in the first two or three rows are usually provided with sheeting for protection, and many fans bring their own additional protection (s, s, and so on). Gallagher performs other prop-food gags including a demonstration of constipation using a jar of peanut butter and an explanation of the difference between men and women using a sausage wrapped in a banana peel.

Gallagher claims he originally developed the Sledge-O-Matic act for , but it was rejected so Gallagher used as the center piece of his own actFact|date=August 2008.

In addition to the Sledge-O-Matic, Gallagher’s act features a variety of props, including a large trampoline designed to look like a couch, an adult sized , and a cap with a fringe of hair attached to the back.

In particular, while the Sledge-O-Matic act works as an example of physical , Gallagher frequently uses this portion of his act as a criticism of American consumer culture. The act itself is a of ads for s such as Ginsu knives that permeated the American television airwaves during non-primetime hours in the late 1970s. (See [http://en.wikiquote.org/wiki/Leo_Gallagher Wikiquotes] for the traditional introduction to the Sledge-O-Matic sequence.)

Gallagher writes all of his own material, runs his own operation, and does more than 100 concerts a year. He currently denies that he has a first name, although it is unclear whether he legally changed his name.

All of Gallagher’s affairs are handled exclusively by his companies, Sold Out Shows and Fun Fun Fun. Gallagher is a self-contained touring business with an agent, promoter and road manager all in-house. For the last 18 years, Ruth Ann Hoffman has booked and promoted all of Gallagher’s dates across the country. Gallagher calls Hoffman his “personal promoter.”Fact|date=February 2007

The “Gallagher Too” controversy

At some point during the early 1990s, Gallagher’s younger brother Ron Gallagher asked Gallagher for permission to perform shows using Gallagher’s old routines, and also using Gallagher’s trademark Sledge-O-Matic routine. The idea was that Ron Gallagher, who was unemployed, would tour the country working small venues that couldn’t afford a show put on by Gallagher himself. Since Ron bears a strong familial resemblance to his older brother, the show would be almost like having a real Gallagher show.

Gallagher granted his blessing to his younger brother on the condition that Ron and his manager would make it clear in their promotional materials that it was Ron Gallagher, not Gallagher himself, that was putting on the show.

After a few years of complying with Gallagher’s conditions, Ron began blurring the line between his act and that of his brother. He would often promote his act as “Gallagher Too,” a moniker Gallagher felt was insufficiently informative. In some instances, Ron’s act was promoted in a way that provided no clue to prospective attendees that they were seeing someone other than Gallagher himself.

Gallagher initially attempted to get his brother to stop these activities by requesting that he stop using Gallagher’s well-known Sledge-O-Matic routine. These efforts proved futile, and Ron kept touring as “Gallagher Too” while using the Sledge-O-Matic routine his older brother had made famous. Consequently, in August 2000, Gallagher sued his brother for trademark violations and false advertising. The courts ultimately sided with Leo Gallagher, and an injunction was granted prohibiting Ron from performing any act that impersonates his brother in small clubs and venues.

During the lawsuit, all of Gallagher’s immediate family sided with Ron over the controversy. As a consequence, Gallagher is now estranged from his parents and siblings. [ [http://90ways.com/critarchive/crit93.php 90ways - Criticism - Week 93 ] ]

In January 2005, the "Oregonian"’s entertainment section printed a short interview with Gallagher where he gave scathing reviews about many of the top comedic performers in America. He criticized stand-up performers and comedic actors, including , , , , and . Gallagher expressed frustration over Hanks and Keaton’s success, remarking that they were millionaires while "he" was renting a condo. While criticising and Letterman, he expressed surprise that they never invited him to appear in their shows, citing that never liked him, but still booked him.

Gallagher reserved special wrath for ’s list of the 100 Greatest Stand-ups of All Time, where he was listed as #100, just below . Gallagher criticized the list as a whole, stating that when reading it he “was trying to find anyone I ever heard of.” He went on to claim that he had invented the concept of the one-person comedy show on cable television. [ [http://www.cantstopthebleeding.com/?p=720 Can’t Stop The Bleeding » Comedy Is Not Pretty. And Neither Is Gallagher’s Act ] ]