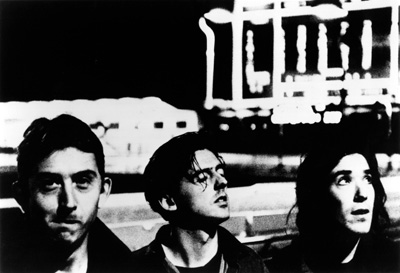 Talk Talk were a popular British rock group that were active from 1981 to 1991. In mainstream circles, the group is most well known for their early singles, including the international hits "Today", "Talk Talk", "It's My Life", "", "Dum Dum Girl", "Life's What You Make It" and "Living in Another World". However, in the music community they are recognised more for the artistic achievements of their later experimental albums, recognised as forerunners to the genre.

Talk Talk began as a quartet consisting of (vocals), Simon Brenner (keyboards), Lee Harris (drums) and (bass). Hollis was the brother of Ed Hollis, manager of , and had started out in a punk band called The Reaction. They were generally associated with the New Wave movement; more specifically, in their early years, they were often compared with , as both bands not only featured a double-barrelled name and a -inspired musical direction, but also a record label () and producer ().

Talk Talk's first line-up released a self-titled debut EP in 1982 which was quickly expanded into a full-length album entitled "". The band charted in the UK with the singles "Talk Talk" and "Today", both produced by Thurston (who had also produced hits for and Howard Jones).

Brenner left after the 1983 non-LP single "My Foolish Friend", which was produced by frequent collaborator . At this point, the band added unofficial fourth member Tim Friese-Greene, who became Talk Talk's keyboard player, producer, and Hollis' frequent writing partner. Although a major contributor to the band's studio output, Friese-Greene did not generally play with the band during live shows or appear in publicity material. Talk Talk stopped playing live in 1986.

Talk Talk had a huge success in 1984/85 internationally (and particularly in continental Europe) with the album "It's My Life". The accompanying single "Such a Shame" became a major hit and a number one in several countries during this period, and an icon for many New Wave an listeners (as the songs "" by or "" by , nearly released at the same time). The aforementioned title cut was also a big hit (entering notably the and ). But strangely, this album and its singles were largely ignored in their native UK, even though they maintained a substantial following.

They eventually abandoned the New Wave style completely with the minor classic "" in 1986. This became their biggest studio album success in the UK, partly thanks to the Top 20 single "Life's What You Make It", and was again a hit album in Europe, featuring another international Top 40 single: "Living in Another World". By this time, all Talk Talk songs were being written by Hollis and Friese-Greene. Guests on the album included .

The extended line-up for the 1986 tour consisted of Hollis, Webb and Harris plus John Turnbull (guitars), Rupert Black and Ian Curnow (keyboards), Phil Reis and Leroy Williams (percussion) and Mark Feltham (harmonica). Most notable among these concerts was the Montreux Jazz Festival.

The success of "The Colour of Spring" afforded the band an open budget and schedule for the recording of their next album. About a year in the making, and featuring contributions from many outside musicians, "" was released in 1988, on EMI's label. The album was assembled from many hours of improvised instrumentation that Hollis and Friese-Greene had edited and arranged using digital equipment. The result was a mix of rock, jazz, classical, and ambient music. While critically praised, the album was not as commercially viable as its predecessors, and the band declared they would not tour in support of it.

During the making of "Spirit of Eden", Talk Talk manager Keith Aspden had attempted to free the band from their with . "I knew by that time that EMI was not the company this band should be with," Aspden said. "I was fearful that the money wouldn't be there to record another album." [Irvin, "Paradise Regained," 54.] EMI, however, wished to keep the band on their roster. [Neiss.] After many months of litigation, the band ultimately succeeded in extracting themselves from the contract. EMI then sued the band, claiming that "Spirit of Eden" was not "commercially satisfactory," but the case was thrown out of court. [Tape Op]

In 1990, Talk Talk agreed to a two-album contract with . They released "" on the imprint in 1991. By this time, Webb had left the group. Talk Talk had by then morphed into what was essentially a brand name for the studio recordings of Hollis and Friese-Greene, along with a bevy of session studio players (including long-term Talk Talk drummer Harris). "Laughing Stock" crystallised the experimental sound the band started with "Spirit of Eden" (which has been retroactively categorised as "" by some critics). "Laughing Stock" adopted an even more minimalist style than its predecessor, but this did not stop it achieving a respectable Top 30 showing in the .

With the band now released from EMI, the label released the retrospective compilation "" in 1990. It went on to sell over one million copies in Britain alone and rose to number 3 in the UK album chart. The 1984 single "It's My Life" was also re-released, and this time became the band's biggest success in their native country, making number 13 in the . Following up on this renewed popular interest in the band, the label released "" in 1991, a compilation of singles and alternative versions which made the Top 40, an unusually high showing for a remix album. The band sued EMI for remixing their material without permission.

After "Laughing Stock", Talk Talk disbanded. Paul Webb rejoined Lee Harris, and the two went on to form the band , while Tim Friese-Greene started recording under the name Heligoland. In 1998, Mark Hollis released his self-titled solo début "Mark Hollis", which was very much in keeping with the minimalist post-rock sound of "Spirit of Eden" and "Laughing Stock".

Webb also collaborated under the name of with and released "" in , while Harris featured on the album, "".