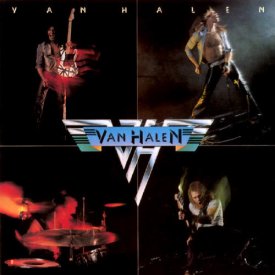 "Van Halen" is the self-titled debut by American band , released in 1978.

Recorded in 1977 and released in February 1978, it is considered to be one of the most famous debut albums by a hard rock/heavy metal band in history along with such albums as 's "Led Zeppelin", 's "Are You Experienced", Boston's "Boston", 's "Black Sabbath" and ' "".

The album has sold over ten million copies in the United States alone and is considered to be one of the most successful debuts by a hard rock band. Along with "1984", it gives Van Halen two original (not a greatest hits) albums with Diamond status in sales -- a feat achieved by only five other rock bands: , , , , and .

From a technical perspective, 's guitar solo, "Eruption", was hugely influential on many guitarists. The near the end is generally regarded as seminal in the development of fretboard , a virtuosic style of solo guitar playing which became popular in the 1980s. The solo's "dive-bomb" pitches also led to the wide-spread use of bridge tremolo bars. "Eruption" was added to the album when producer, heard Eddie warming up with the instrumental. Eddie told Ted that it was just a solo piece he played live.Fact|date=January 2008

The album cover was shot at the world famous "".

In 2006, a cover of "You Really Got Me" based on Van Halen's cover appeared as a playable song in the music video game "".

All songs by Anthony, Roth, Van Halen and Van Halen, except where noted