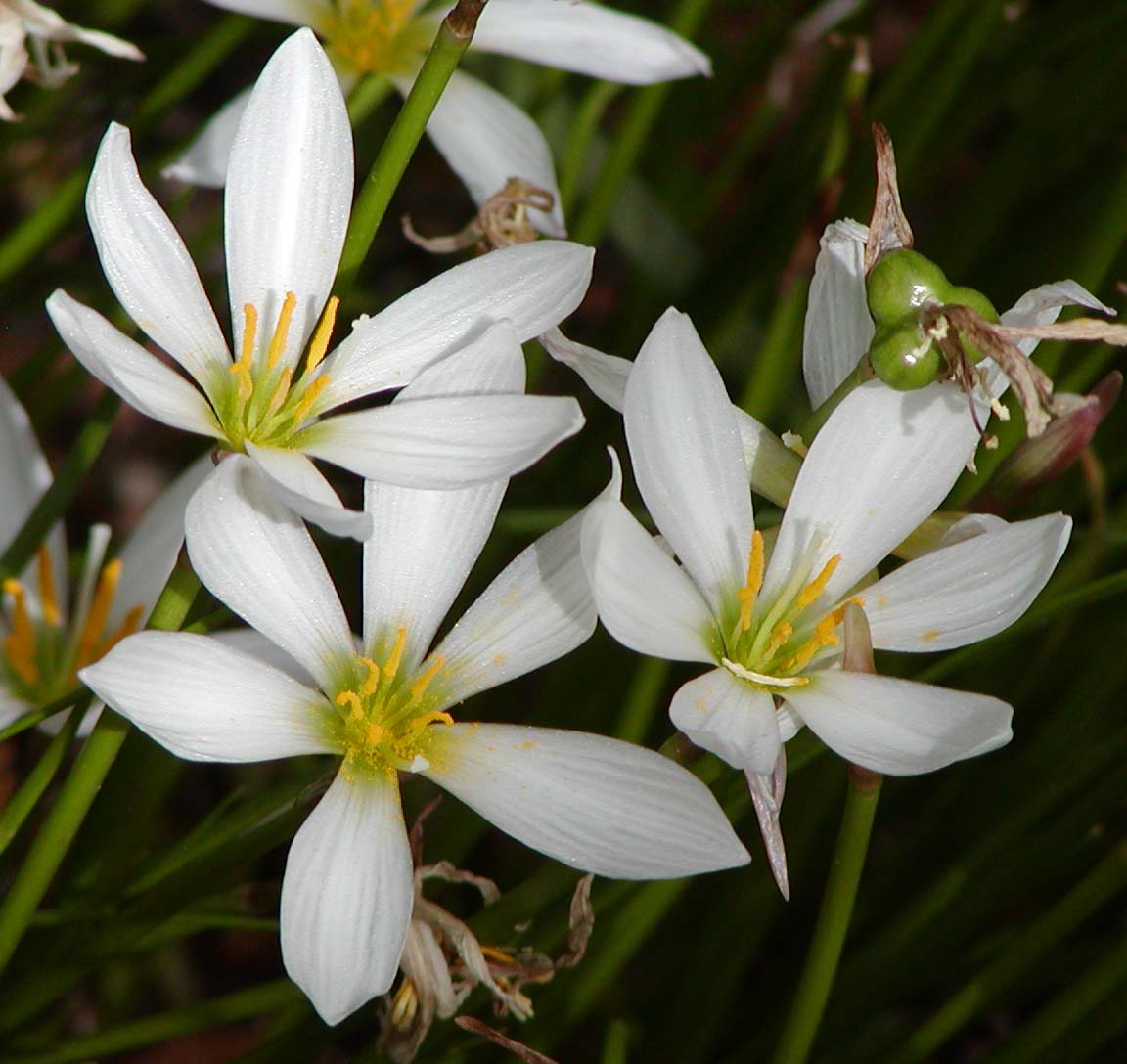 "Zephyranthes" is a of about 70 species in the Amaryllis family. Common names for species in this genus include fairy lily, rainflower, zephyr lily, magic lily and rain lily.

According Meerow et al., suggests that they are native to the . This is important to mention since several species have become naturalized (sometimes unintentionally) in distant places like Hawaii, Indonesia, and Thailand. The species that are native to the higher altitudes in Mexico (e.g. "Z. lindleyana") and parts of North America (e.g. "Z. longifolia") or Argentina (e.g. "Z. candida") represent the species having the greatest potential for cold hardiness.

These perennial s are remarkable for the many ecological niches they tolerate (periodically wet soil to desert conditions), and have many ornamental characteristics worth preserving. Care should be taken with the plants since many of the parts, leaves, bulbs etc. are toxic. Although the genus has been evaluated for possible medicinal properties the biochemically toxic compounds are things like alkaloids. (Kojima et al 1997.)

Species in the genus which are listed in this article, vary in morphology. Characteristics such as bulb size, tunic color, and leaf morphology help to identify the species. Foliage in the wild is often ephemeral, but under cultivation becomes more persistent. Leaf color ranges from the bright grassy green of "Z. candida" (shown in the photo) to rather broad glaucous colored foliage such as Z. drummondii. A few of the species have distinct bronze tints in the foliage when grown in bright light. Size of leaves in these species, ranges from dark green and tiny grassy leaves in species like "Z.jonesi" or "Z. longifolia", to broader, glaucous leaves in species like "Z. drummondii", and perhaps largest of all, the cultivar commonly known as "Horsetail Falls" which has handsome broad leaves almost like a "Hippeastrum".

Flower color in the species ranges from white to yellow (various tints of this color from lemon to sulfur) and pink. Zephyranthes have erect flower stalks which support a flower that may be upward facing or slightly nodding. The funnel-shaped, s with six s can be crocus shaped, but may also open flat such as in Z.jonesii or even reflex slightly.The flowers of some species have a sweet, pleasant fragrance. Fragrance appears to be recessive in crosses, but there are a few species or hybrids, "Z. drummondii" (white), "Z. morrisclintae" (pink)and "Z.jonesii" (light yellow), that all carry the trait. At least 2 of these open their flowers at night and are attractive to nocturnal insects. The flowers typically last only for a day or two; but new flowers may appear in a succession of blooms, especially during humid or rainy weather. Various members of the genus may bloom spring only or repeat and continue into autumn, often a few days after rainstorms thus one of the common names, rainlilies. Periods of synchronous bloom, which breeders have dubbed 'blitzes', are part of their ornamental value, but also times breeders exploit for the purpose of producing new hybrids. (Marta 2005)

Most species under cultivation will bloom without the naturally imposed drought and wet that occurs in nature. Greenhouse grown plants bloom very freely but cycle through periods of bloom. One of the longest blooming of all the species is "Z. primulina" which blooms from April until October. Although it is apomictic, it is a choice parent for crosses because of its rapid repeat flowering trait and long bloom season. Some other species such as "Z. Morrisclintae" appear to bloom only in the spring season. Most of these species are easily propagated vegetatively via offsets or twin scaling. A few of them such a Z.clintae are slow to produce increase. Unusual phenotypes can be preserved vegetatively. Sexual reproduction is via seed. The apomictic species freely set seed and faithfully reproduce the maternal phenotype. Sterility in hybrids can be problematic;reasons for this are mentioned below. Seed usually is best sown quickly after harvest, although short term storage can be successful. Maiden seedling can be brought into bloom for some of the hybrid in 8-12 after sowing in ideal conditions. This is great for doing necessary checks for apomixis. Currently these plants are grown in the garden in USDA zones 7 and higher. Hopefully with some attention from breeders new cultivar might increase the plants' cold hardiness. Often the plants are sold in nurseries already potted up, this is a great benefit since the growth cycle is not interrupted. Dried bulbs are marketed wholesale and rarely may be slow to rebloom. Such bulbs usually recover once they have a long growing season after rooting out.

Breeding with these species has some inherent difficulties summarized by M. RoyChowdhury (2006 JAAS) as ranging from pseudogamy and , differences in chromosome number and varying times of flowering. In spite of these drawbacks interesting breeding work is being done to enhance the value of the plants as ornamentals. Because of the nature botanical restriction breeding programs often encounter impediments. Reciprocal crosses may be difficult because the apomictic parent cannot be used as female parents. However interspecific crosses are well documented (RoyChowdhury 2006). There are tri-hybrids and quad hybrids being produced. (Crossing 3 or 4 distinct species.) Such work indicates that complex hybrids should be possible. One constraint remains that seedlings may still carry the apomictic trait, and it is necessary to have progeny from a test cross to determine this. Mr. John Fellers, Mr. Fadjar Marta and Mr. Tony Avent are just a few of the talented breeders currently working today to increase the potential for these plants. Their work has come to the attention of connoisseurs of the these plants. Colors in man-made crosses currently include red, orange, tan, salmon, blends, picotees and stripes. Floral types such as goblet shaped, wavy petal edges, narrow petals and doubles have been bred (Marta 2005). Complex hybrids may have advantages in holding their flowers open longer, up to three days. While difficult, there have been a few attempts to cross some of these species with related species in the genus Habranthus. Currently it appears that a few crosses with large flowered Habranthus species have been possible for example the cultivar, 'Normal Pearl' which is an intergeneric cross.

The name Zephyranthes comes from , the god of the west wind in .Therefore one translation for a common name might be Westwind Flower. The west wind presumably brings rain that these plants revel in.