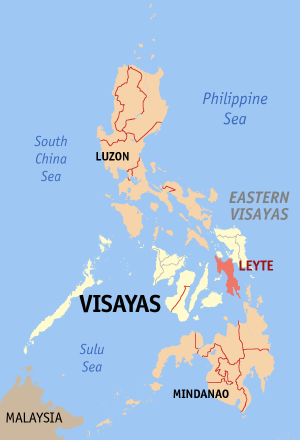 Leyte (pronEng|ˈleɪti in English) is an in the group of the .

The island measures about 180 km (110 mi) north-south and about 65 km (40 mi) at its widest point. In the north it nearly joins Samar, separated by the , which becomes as narrow as 2 km (1.2 mi) in some places. The island province of is also to the north of Leyte and is joined to Leyte island by a bridge across the narrow Biliran Strait. To the south Leyte is separated from by the . To the east, Leyte is somewhat "set back" from the of the , Samar to the northeast and Dinagat to the southeast forming the . To the west are Cebu and .

and staff land at Palo Beach, Leyte, 20 October 1944] Leyte is mostly heavily forested and mountainous, but the in the northeast has much agriculture.

Politically, the island is divided into two provinces: Leyte and . Southern Leyte is in the south and includes the island of Panaon, while the province of , a separate island which used to be a part of Leyte province, is to the north.

The chief cities of Leyte are , on the eastern shore at the northwest corner of Leyte Gulf, and , on the west coast.

Leyte today is notable for the geothermal electric power plants near Ormoc.

However, Leyte is most famous for its role in the reconquest of the in the . On 20 October 1944, General waded ashore on Leyte, saying "I have returned". However, the ese did not give up so easily, as the ensuing proved, and convergence of naval forces resulted in the four-day , the largest naval battle in history.

The Leyte Provincial Capitol is the seat of the provincial government where historic viewing of a mural depicting the First Mass of Limasawa in the Orient and the landing of Gen. can be done.

The Leyte Landing Memorial in Red Beach, , marks the spot where American liberation forces landed it also has a lagoon where the life-size statues of Gen. McArthur and his fleet stands.

Lake Danao is a violin-shaped lake hemmed by cloud-capped mountain ranges. It is a hunter’s paradise where wild animals roam the surrounding forests. It is also said to be the home of a giant eel.

The Sto. Nino Shrine and Heritage Museum boasts the painting of the 14 station of the cross done by Filipino artists and a bas-relief of the legend of the first Filipino man and woman (Malakas and Maganda).

The San Juanico Bridge is the longest and the most beautifully designed bridge in the Philippines. It features the picturesque San Juanico Strait with a thousand whirlpools, lovely islets and view.