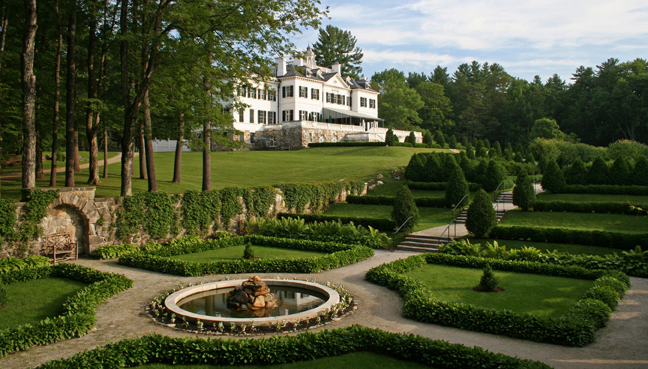 The Mount (1902) is a in , the home of noted American author , who designed the house and its grounds and considered it her "first real home." The estate, located in , is open to the public from May to October. Visitors are offered tours of the house and gardens.

The Mount's main house was inspired by the 17th-century in England, with additional influences from classical Italian and French architecture. used the principles described in her first book, "" (co-authored with ), when she designed the house. She thought that good architectural expression included order, scale, and harmony. Its west (entry) elevation is three stories; on the garden side it is two stories with an opening out to a large, raised, stone terrace overlooking the grounds. The house exterior is a striking white stucco, strongly set off by black shutters, and rises from a quasi-rustic foundation of coarse field stone. Clusters of gables and white chimneys rise from the roof, which is capped with a and . This main house is augmented by Georgian Revival gatehouse and stable, and a . Wharton's sometime collaborator assisted with the architectural design. Wharton's niece, Beatrix Jones Farrand, designed the kitchen garden and the drive; Farrand was the only woman of the eleven founders of the .

Edith Wharton and her husband, Edward, lived in the Mount from 1902 to 1911. After the Whartons left, the house was a private residence, a girls' dormitory for the Foxhollow School, and site of the theatre company . It was then bought by Edith Wharton Restoration, which has restored much of the property to its original condition.

The house is situated at the high end of its grounds. The original site was convert|113|acre|km2 of farmland, with another 15 acres later added. The current estate size is 49.5 acres. Restored gardens include an Italian walled garden, formal flower garden, alpine rock garden, lime walk, and extensive grass terraces.

The Mount has recently fallen into financial troubles, defaulting in February 2008 on payment of a $4.3 million bank loan as well as still owing money to private lenders. Foreclosure proceedings had been threatened and the head of the Edith Wharton Restoration group resigned. A grant from the allow an extension on the bank loan until April 24 and fund raising efforts have been initiated. [McGrath, Charles. " [http://www.nytimes.com/2008/04/03/books/03wharton.html?ref=arts Leader Quits at the Mount, Former Home of Wharton] ", "The New York Times"., . Accessed , .]