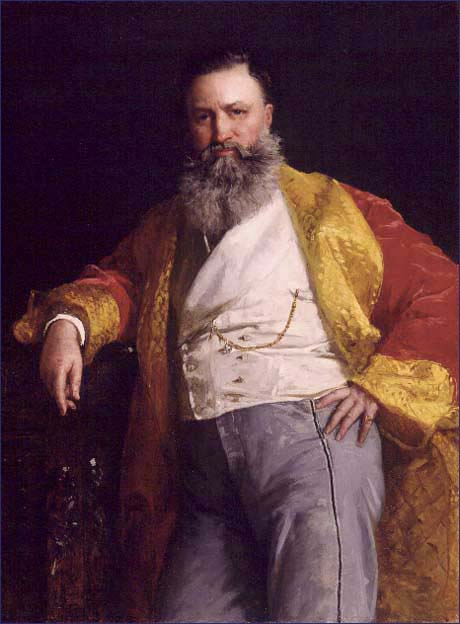 Isaac Merritt Singer (, – , ) was an , , and . He made important improvements in the design of the and was the founder of the Singer Sewing Machine Company. [ [http://www.shveya.org/history_zinger/ Все о швейных машинах -История создания корпорации Зингер ] ]

Isaac Singer was born in , on , . He was the last born child of Adam Singer and his first wife, Ruth Benson. Isaac's father may have been a German immigrant from whose surname at birth was Reisinger and some sources indicate he may have been of descent.

Isaac was married for the first time in 1830, to Catharine Maria Haley. After, they moved from Pittstown to in about 1831, where they seem to have lived with her parents for a time. By the summer of 1833 they had again moved, this time to . Isaac had worked in his older brother's machine shop before marriage and learnt the machinists trade there; in Otsego in the village of Isaac was again working in a machine shop, this time owned by George Pomeroy.

Isaac had two children by Catharine: William, born in 1834, and Lillian, born in 1837. In 1835 he moved with Catherine and their young son William to New York City, working in a press shop. In 1836, he left the city as an agent for a company of players, touring through Baltimore, where he met Mary Ann Sponsler, to whom he proposed marriage. He returned with Mary Ann to New York in 1837. That year Isaac had two children born: his wife Catherine gave him Lillian, and Mary Ann gave him a son. His domestic life with Catharine did not prosper after this, but they were not officially divorced until 1860. After Mary Ann arrived in New York and found out that Singer was already married, she and Singer returned to Baltimore, presenting themselves as a married couple.

In 1839 Singer obtained his first , for a machine to drill rock, selling it for $2,000. This was more money than he had ever had before, and in the face of financial success, he opted to return to his career as an actor. He went on tour, forming a troupe known as the "Merritt Players", and appearing onstage under the name "Isaac Merritt", with Mary Ann also appearing onstage, calling herself "Mrs. Merritt". The tour lasted about five years.

In 1844 Isaac took a job in a print shop in , but moved quickly on to Pittsburgh in 1846 to set up a woodshop for making wood type and signage. Here he developed and patented a "machine for carving wood and metal" on , .

At thirty-eight years old, with two wives and eight children, he packed up his family and moved back to New York City, hoping to market his wood-block cutting machine there. He obtained an advance to build a working prototype, and constructed one in the shop of A. B. Taylor & Co. However not long after the machine was built the steam boiler blew up at the shop, destroying the prototype. Before it was destroyed, Orson C. Phelps, owner of a machine shop in had heard about it. He invited Singer to set up one of his machines in there.

Singer went to Boston in 1850 to set up machine the at Phelps' machine shop. Orders for Singer's wood cutting machine were not, however, forthcoming. Coincidentally Lerow and Blodgett s were being constructed in Phelps' machine shop. Phelps asked Singer to look at the sewing machines, which were difficult to use and difficult to produce. Singer noted that the sewing machine would be more reliable if the shuttle moved in a straight line rather than a circle, with a straight rather than a curved needle. Singer was able to obtain US Patent number 8294 on his improvements on August 12, 1851. Singer's prototype sewing machine became the first to work in a practical way.

Singer obtained financing from George B. Zieber, and formed a partnership with Phelps and Zieber to found the "Jenny Lind Sewing Machine Company", named for the opera singer . The company was soon renamed to as "I. M. Singer & Co.", and the machine became known as a Singer.

Singer did not invent the sewing machine, and never claimed to have done so. By 1850, when Singer saw his first sewing machine, it had been "invented" four times. All sewing machines before 's produced a , which had the disadvantage of easily unravelling. Hunt's machine produced a , as did all subsequent machines including Lerow and Blodgett's, which Singer in turn improved in Phelps's shop. independently developed a sewing machine and obtained a patent on September 10, 1846.

War broke out between Howe and Singer, with each claiming patent primacy. Singer set out to discover that Howe's improvements had been reinventions of existing technology, and found one of Hunt's old machines, which indeed created a lock-stitch with a shuttle. Hunt applied in 1853 for a patent, claiming priority to Howe's patent, issued some seven years earlier. A lawsuit, , came to trial in 1854, and was resolved in Howe's favor. Howe then brought suit to stop Singer from selling Singer machines, and protracted litigation ensued.

In 1856, manufacturers Grover, Baker, Singer, Wheeler, and Wilson, all accusing the others of , met in to pursue their suits. Orlando B. Potter, a lawyer and president of the Grover and Baker Company, proposed that, rather than sue their profits out of existence, they pool their patents. This was the first , a process which enables production of complicated machines without legal battles over patent rights. They agreed to form the Sewing Machine Combination, but for this to be of any use they had to secure the cooperation of Elias Howe, who still held certain vital uncontested patents which meant he received a royalty on every sewing machine manufactured by any company. Terms were arranged, and Howe joined on. Sewing machines began to be mass produced: I. M. Singer & Co manufactured 2,564 machines in 1856, and 13,000 in 1860 at a new shop on in New York.

Sewing machines had until now been industrial machines, made for s, but smaller machines began to be marketed for home use. I. M. Singer expanded into the European market, establishing a factory in , near , controlled by the parent company, becoming one of the first American-based s, with agencies in and .

The financial success gave Singer the ability to buy a mansion on , into which he moved his second family. In 1860, he divorced Catherine, on the basis of her with Stephen Kent. He continued to live with Mary Ann, until she spotted him driving down Fifth Avenue seated beside one Mary McGonigal, an employee, about whom Mary Ann had well-founded suspicions, for by this time Mary McGonigal had borne Isaac Singer five children. The surname Matthews was used for this family. Mary Ann (still calling herself Mrs. I. M. Singer) had her husband arrested for . Singer was let out on bond and, disgraced, fled to in 1862, taking Mary McGonigal with him. In the aftermath, another of Isaac's families was discovered: he had a "wife" Mary Eastwood Walters and daughter Alice Eastwood in , who both adopted the surname "Merritt". By 1860, Isaac had fathered and recognized eighteen children (sixteen of them remaining alive), by four women.

With Isaac in London, Mary Ann began setting about securing a financial claim to his assets by filing documents detailing his infidelities, claiming that though she had never been formally married to Isaac, that they were in fact wed under (by living together for seven months after Isaac had been divorced from his first wife Catherine). Eventually a settlement was made, but no divorce was granted. However, she asserted that she was free to marry, and indeed married John E. Foster. Isaac, meanwhile, had renewed acquaintance with , a Frenchwoman he had lived with in Paris when he was staying there in 1860. She left her husband, and married Isaac under the name of Isabella Eugenie Sommerville, on , , while she was pregnant.

In 1863, I. M. Singer & Co. was dissolved by mutual consent, with the business continued as "The Singer Manufacturing Company," enabling the reorganization of financial and management responsibilities. Singer no longer actively participated in the firm's day-to-day management, but served as a member of the Board of Trustees (even though he now lived in Europe) and was a major stockholder.

He now began to increase his new family: he would eventually have six children with his wife Isabella. Unable, probably because of Isaac's chequered marital past, to enter New York society, the family emigrated to Paris, never to return to the United States. Fleeing the , they resided first in , then in , (near ) on the coast where he built a large house, . He brought some of his other children to live there. Nine days after the wedding of his daughter Alice Merritt to William Alonso Paul La Grove, Isaac Singer died of "an affection of the and inflammation of the wind-pipe." He was interred in Torquay cemetery.

Estate and legacy; his families after his death

Singer left an estate of about $14,000,000 and two wills disposing this between his family members, leaving some out for various reasons. Suits followed, with Mary Anne claiming to be the legitimate "Mrs. Singer". In the end Isabella was declared the legal widow. Isabella remarried in 1879 with Dutch musician and settled in . After his death in 1887, she remarried in 1891 with Paul Sohège.

Isaac's 18th child married Prince in 1887, when she was 22. After of this marriage in 1891, she married Prince in 1893. She would become a prominent of French music, e.g., composed his "Socrate" as one of her commissions (1918). As a she became involved with from 1923 on. Another of Isaac's daughters, Isabelle-Blanche (born 1869) married ( was their daughter). Isabelle committed suicide in 1896. A brother to Winnaretta and Isabelle, Paris Singer, had a child by . Another brother, , became a substantial donor to the of the southwest of , which later became the ; one of the university's buildings is named in his honour.