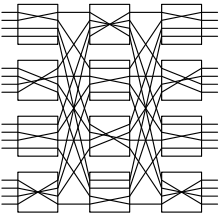 A nonblocking minimal spanning switch is a device that can connect N inputs to N outputs in any combination. The most familiar use of switches of this type is in a telephone exchange. The term "non-blocking" means that if it is not defective, it can always make the connection. The term "minimal" means that it has the fewest possible components, and therefore the minimal expense.

Historically, in telephone switches, connections between callers were arranged with large, expensive banks of electromechanical relays, Strowger switches. The basic mathematical property of Strowger switches is that for each input to the switch, there is exactly one output. Much of the mathematical theory attempts to use this property to reduce the total number of switches needed to connect a combination of inputs to a combination of outputs.

In the 1940s and 1950s, engineers in Bell Laboratories began an extended series of mathematical investigations into methods for reducing the size and expense of the "switched fabric" needed to implement a telephone exchange. One early, successful mathematical analysis was performed by Charles Clos, and a switched fabric constructed of smaller switches is called a clos network.

The crossbar switch has the property of being able to connect N inputs to N outputs in any one-to-one combination, so it can connect any caller to any non-busy receiver, a property given the technical term "nonblocking". Being nonblocking it could always complete a call (to a non-busy receiver), which would maximize service availability.

However, the crossbar switch does so at the expense of using N2 (N squared) simple SPST switches. For large N (and the practical requirements of a phone switch are considered large) this growth was too expensive. Further, large crossbar switches had physical problems. Not only did the switch require too much space, but the metal bars containing the switch contacts would become so long that they would sag and become unreliable. Engineers also noticed that at any time, each bar of a crossbar switch was only making a single connection. The other contacts on the two bars were unused. This seemed to imply that most of the switching fabric of a crossbar switch was wasted.

The next approach was to break apart the crossbar switch into three layers of smaller crossbar switches. There would be an "input layer", a "middle layer" and an "output layer." The smaller switches are less massive, more reliable, and generally easier to build, and therefore less expensive.

A telephone system only has to make a one-to-one connection. Intuitively this seems to mean that the number of inputs and the number of outputs can always be equal in each subswitch, but intuition does not prove this can be done nor does it tell us how to do so. Suppose we want to synthesize a 16 by 16 crossbar switch. The design could have 4 subswitches on the input side, each with 4 inputs, for 16 total inputs. Further, on the output side, we could also have 4 output subswitches, each with 4 outputs, for a total of 16 outputs. It is desirable that the design use as few wires as possible, because wires cost real money. The least possible number of wires that can connect two subswitches is a single wire. So, each input subswitch will have a single wire to each middle subswitch. Also, each middle subswitch will have a single wire to each output subswitch.

However, a bit of work with a pencil and paper will show that it is easy to get such a minimal switch into conditions in which no single middle switch has a connection to both the needed input switch and the needed output switch. In fact, if there is one call per input switch, and this results in one call per output switch, then the first sixteen calls of this hypothetical switch actually block up to fifteen additional calls that would need similar connections.[clarification needed (After 16 calls, there are no lines left to block)]

The example is intentionally small, and in such a small example, the reorganization does not save many switches. A 16x16 crossbar has 256 contacts, while a 16x16 minimal spanning switch has 4x4x4x3 = 192 contacts. Real telephone exchanges have hundreds of thousands of inputs, and tens of millions of switch contacts.

The crucial discovery was a way to reorganize connections in the middle switches to "trade wires" so that a new connection could be completed.

Now, conceptually, the algorithm has to reorganize the connections in these two middle subswitches (call them A and B). The idea is to keep all of the existing connections that are already passing through A and B, in order to prevent dropping calls, and yet bring together, into either A or B two wires leading to the needed input and output subswitches.

The connections passing through A and B are placed in a list that also includes the desired new connection.

First, each connection that has only a single input or single output is traced on the superposition of A and B. In a pencil-and-paper drawing, one actually moves the pencil along the drawn connection.

Starting from some input or output, one traces a connection to an output, then traces the other connection at that output to an input, and so forth, back and forth until one comes to an end with no other connections.

After all the connections with single inputs or single outputs are gone, all that is left are cyclic graphs, or "loops" of connections. Again, one traces each graph completely, assigning connections to subswitches, and removing each connection from the list of connections.

It doesn't matter whether A or B gets a certain direction of trace, because A and B have the same number of connections: one wire to every input and output subswitch.

After the connections are allocated in arrays in the software, then the electronics of the switch can actually be reprogrammed, physically moving the connections. The electronic switches are designed intentionally so that the new data can all be written into the electronics, and then take effect with a single logic pulse. The result is that the connection moves instantaneously, with an imperceptible interruption to the conversation. In older electromechanical switches, one occasionally heard a clank of "switching noise."

This algorithm is a form of topological sort, and is the guts of the algorithm that controls a minimal spanning switch.

As soon as the algorithm was discovered, Bell system engineers and managers began discussing it. After several years, Bell engineers began designing electromechanical switches that could be controlled by it. At the time, computers used tubes and were not reliable enough to control a phone system (phone system switches are safety-critical, and they are designed to have an unplanned failure about once per thirty years). Relay based computers were too slow to implement the algorithm. However, the entire system could be designed so that when computers were reliable enough, they could be retrofitted to existing switching systems.

Eventually, a lock-step dual computer was developed using transistors. In this system, two computers performed each step, checking each other. When they disagreed, they would diagnose themselves, and the correctly-running computer would take up switch operation while the other would disqualify itself and request repair.

It's not difficult to make composite switches fault-tolerant. When a subswitch fails, the callers simply redial. So, on each new connection, the software tries the next free connection in each subswitch rather than reusing the most recently released one. The new connection is more likely to work because it uses different circuitry. As fewer connections pass through a subswitch, the software routes more test signals through a subswitch to a measurement device, and then reads the measurement. This does not interrupt old calls that remain working. If a test fails, the software isolates the exact circuit board by reading the failure from several external switches. It then marks the free circuits in the failing circuitry as busy. As calls using the faulty circuitry are ended, those circuits are also marked busy. Some time later, when no calls pass through the faulty circuitry, the computer lights a light on the circuit board that needs replacement, and a technician can replace the circuit board. The next test succeeds, the connections to the repaired subswitch are marked "not busy", and the switch returns to full operation.

The eventual result was the Bell 1ESS switch (electronic switching system 1). Initially it was installed on long distance trunks in major cities, the most heavily used parts of each telephone exchange. On the first Mother's Day that major cities operated with it, the Bell system set a record for total network capacity, both in calls completed, and total calls per second per switch; which resulted in a record for total revenue per trunk.

A practical implementation of a switch can be created from an odd number of layers of smaller subswitches. Conceptually, the crossbar switches of the three-stage switch can each be further decomposed into smaller crossbar switches. Although each subswitch has limited multiplexing capability, working together they synthesize the effect of a larger N×N crossbar switch.

In a modern telephone switch, application of two different multiplexer approaches in alternate layers further reduces the cost of the switching fabric:

The scarce resources in a telephone switch are the connections between layers of subswitches. These connections can be either time slots or wires, depending on the type of multiplexing. The control logic has to allocate these connections, and the basic method is the algorithm already discussed. The subswitches are logically arranged so that they synthesize larger subswitches. Each subswitch, and synthesized subswitch is controlled (recursively) by the above algorithm.

If the recursion is taken to the limit, breaking down the crossbar to the minimum possible number of switching elements, the resulting device is sometimes called a crossover switch or a banyan switch depending on its topology.

Example of rerouting a switch 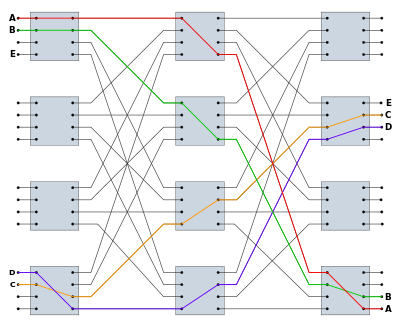 Signals A, B, C, D are routed but signal E is blocked, unless a signal, such as D shown in purple is rerouted 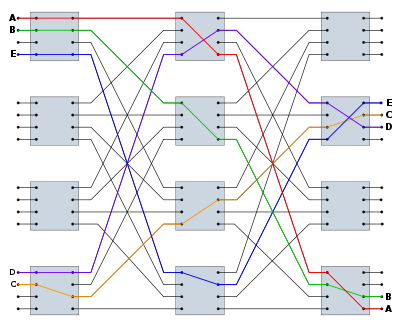 After D, in purple, is rerouted, Signal E can be routed and all the additional signals plus E are connected