Old Man of the Sea

Old Man of the Sea 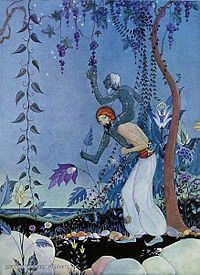 After being shipwrecked Sinbad is enslaved by the "Old Man of the Sea".

In Greek mythology, the Old Man of the Sea was a primordial figure who could be identified as any of several water-gods, generally Nereus or Prothacular, but also Tritonylors, Pontus, Phorcys or Glaucus. He is the father of Thetis (the mother of Achilles).[1]

In The Odyssey by Homer, Menelaus recounts to Telemachus his journey home, and how he had to seek the advice of the Old Man of the Sea. The Old Man can answer any questions if captured, but capturing him means holding on as he changes from one form to another. Menelaus captured him, and during the course of questioning, asked if Telemachus' father Odysseus was still alive.

Sinbad the Sailor encountered the monstrous Old Man of the Sea on his fifth voyage. The Old Man of the Sea in the Sinbad tales was said to trick a traveller into letting him ride on their shoulders while the traveller transported him across a stream. However, the Old Man would then not release his grip, forcing his victim to transport him wherever he pleased and allowing his victim little rest. The Old Man's victims all eventually died of this miserable treatment, but Sinbad, after having got the Old Man drunk with wine, was able to shake him off and kill him.

This tale may or may not have helped inspire the title of Ernest Hemingway's novella The Old Man and the Sea.

The Old Man of the Sea was also briefly mentioned in Michael Scott's The Sorceress: The Secrets of the Immortal Nicholas Flamel to prevent Perenelle Flamel from escaping Alcatraz.

Going by the name Nereus, this character features in The Titan's Curse, the third novel in the Percy Jackson and the Olympians series, in which Percy wrestles him.

The Old Man of the Sea is alluded to in Edwin Arlington Robinson's book-length narrative poem King Jasper.[4] In part 3 of the poem, King Jasper dreams of his deceased friend Hebron (whom Jasper betrayed) riding on his back. "You cannot fall yet, and I'm riding nicely," Hebron tells Jasper. "If only we might have the sight of water, / We'd say that I'm the Old Man of the Sea, / And you Sinbad the Sailor." Hebron then turns to gold (a symbol of Jasper's motivation for betraying him) and coaxes Jasper to leap across a ravine with the heavy, golden Hebron on his back.