Optical margin alignment outdents letters like A, V, W, Y, and punctuation into the margins to align the text border optically. Some users remark that it makes the text margin look crooked, but this is because text frames or margin guides are visible. If text frames are not visible, e.g. in print preview, or when printed, the edge of a block of text looks more even if Optical Margin Alignment is enabled. 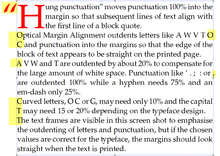 Text is outdented into margins

It is designed to be used for body text, not for artistic text, table text, or headlines. It also works well for block quotes, which benefit from “hung punctuation.” The “Smart Quotes” are outdented 100% into the margin or paragraph indent, so that subsequent lines of text align with the first character in the quotation.

The optimal values used for the outdents is font dependent. A typeface that has capital A, V, W, and Y with vertical sides, needs no outdents for these letters, but the capital T and punctuation will still benefit from using Optical Margin Alignment.

If text has narrow gutters between columns, table borders, or any straight edge such as an image near to the edge of the text, Optical Margin Alignment should not be used because the proximity of the straight line will break the optical illusion.

Suggested Values for Optical Justification These values may be suitable for common seriffed fonts like Times New Roman, Palatino, or Garamond. Other fonts may need different values.

Margin kerning is the term used for slight shifting of certain characters at the margins so the margins look smooth. This technique is sometimes called hanging punctuation, as it is useful mostly for punctuation marks such as comma, period and the like. However, margin kerning is a more general concept, as it can be usefully applied to certain letters as well.