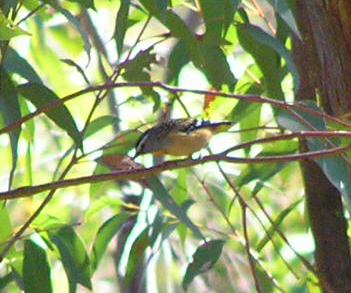 The Spotted Pardalote ("Pardalotus punctatus") is one of the smallest of all n birds at 8 to 10cm in length, and one of the most colourful; it is sometimes known as the Diamondbird. Although moderately common in all of the reasonably fertile parts of Australia (the east coast, the south-east, and the south-west corner) it is seldom seen up close enough to enable identification.

All s have spots and all nest in tunnels at least sometimes, the Spotted Pardalote has the most conspicuous spots and (like the ) always nests in tunnels. Pairs make soft, whistling wheet-wheet calls to one another throughout the day which carry for quite a distance.

One of the difficulties in locating a Pardalote is that the contact call is in fact two calls: an initial call and an almost instant response, and thus can come from two different directions. Spotted Pardalote numbers appear to be declining but the species in not considered endangered at this time.