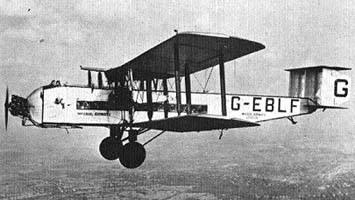 caption = Argosy Mk I of Imperial Airways (1926)
designer =
first flight = March 1926
introduced =
retired =
status =
primary user = Imperial Airways
more users =
produced =
number built = 7
unit cost =
developed from =
variants with their own articles = :"For the 1950s transport, see "The Armstrong Whitworth Argosy was a British three-engined airliner built by and operated by from 1926 to 1935. Known popularly as a "flying railroad car", it was one of the earliest forms of passenger air transport.

The Armstrong Whitworth Argosy stemmed from a declaration by Imperial Airways that all its aircraft would be multi-engined designs on the grounds of safety . They were intended to replace the older single-engined aircraft that Imperial Airways had inherited from its constituent companies, mainly . The first example (G-ELBF ) flew in March 1926 following an initial order for three Argosies from Imperial Airways.

The Argosy was initially used on European routes (later operating on services to South Africa), with the fleet named after famous cities. Argosies implemented the world's first "named" air service, the luxury 'Silver Wing' service from to , in Argosy "City of Birmingham" (G-EBLO). Two seats were removed and replaced with a bar and a steward was in attendance.

The longest flight by an Argosy was G-ABTL "Astraea", which Imperial Airways used to survey the Australia route in 1933. It left Croydon on 29th May and after many stops made it to Melbourne on 29th June. A regular Australia - England air mail service commenced on 10th December 1934, with IA Argosy's flying the Croydon - Darwin sector (with other IA aircraft). [John Stroud. Annals of British and Commonwealth Air Transport. Putnam. 1962. p349-352]

Three Argosies were lost during service with Imperial Airways, with one being written off in a forced landing near and one during a training accident, both in 1931, with no injuries in either accident. In March 1933, however, an Argosy caught fire over , causing a crash in which all 3 crew and 12 passengers were killed .