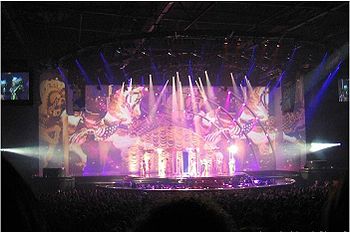 Musicals in Ahoy' was a musical show that took place in 2002 in "Ahoy'" in Rotterdam, Netherlands. It was produced by Stage Entertainment/Joop van den Ende Theatreproductions. There were 7 shows in a row, with 15.000 sold seats every night. It was a song and dance extravaganza supported by the Dutch Musical Ensemble.

Also international stars like Vanessa Williams performed in the "Musicals in Ahoy'" shows.[1]

Artists Musicals in Ahoy' 2002, the "All Star Musical Gala"