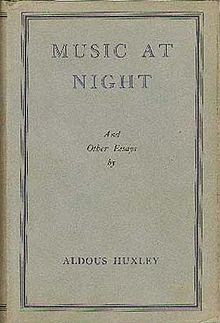 Music at Night is a 1931 collection of essays by Aldous Huxley.

The essays in this books cover different subjects, such as morality in arts ('To the Puritan All Thing are Impure', a defence of his friend D. H. Lawrence), music ("After silence that which comes nearest to expressing the inexpressible is music",[1] he writes in 'The Rest is Silence'), similarities in the behaviour of men and cats ('Sermons in Cats'). Part of these essays may be regarded as a description of changes in society at the first half of the 20th century: 'Forehead Villanious Low' deals with the fruits of universal education, while 'Art and the Great Truth' defines modernist literature as "A terror for the obvious in his [the writer's] artistic medium - (...) which leads him to make laborious efforts to destroy the gradually perfected instrument of language".