The Music Association of Central Texas is a non-profit 501c3 company based in Waco, Texas that exists to "nurture and promote live music in central Texas." Established in 1999 by central Texas bandleader Johnnie Bradshaw, the organization has included hundreds of members, including such notable central Texas artists as Bryan Hill, J.C. Pringle, Justin Morace (aka Cognito), Lorna Willhelm, Willie Nelson, Billy Joe Shaver, Wade Bowen, Kaley Caperton, and others. 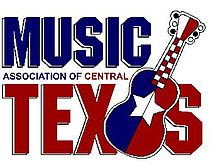 The goals of the Music Association of Central Texas are:
1. Hold regular meetings and encourage communication.
2. To be an advocate for live music in Central Texas and to provide a forum for discussion of issues and seek solutions.
3. To encourage cooperation and communication with related music organizations and businesses by forming a viable trade organization.
4. To promote live music by: (A) Reestablishing good and solid approaches and developing new ideas to promote live music. (B) Seeking the support of the media. (C) Developing stronger support from the public. (D) Recommend and encourage professional standards for the membership. (E) Create a songwriters group to promote originality and develop opportunities.

The business of the Music Association of Central Texas is conducted by a 9 member board, which includes a president, vice-president, secretary, treasurer and 5 additional members. The board meets on the first Monday of every month to discuss current business, take financial account of the organization and review and follow up on ideas submitted by members.

The board meeting is followed by a general membership meeting, at which members are kept up to date about the work of the organization and can submit ideas for new projects. Members are encouraged to bring instruments, as the general meeting is usually followed by an open jam session.

Each September the Music Association hosts the River Jam concert, benefiting the local charity Caritas. River Jam is an all day music festival featuring local artists playing several different genres of music. Past featured artists have included John Nitzinger, Pride and Joy, Johnny Mandell & The Muddcatts, Lorna Wilhelm and David Zychek. Along with the regular admission price, attendees are asked to bring 2 or more non-perishable food items for the Caritas food pantry, which helps low income residents in central Texas. The fifth River Jam on September 16, 2006 raised a total of $2,500 for Caritas and took in more than 600 pounds of food.[1]