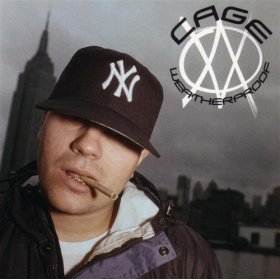 Weatherproof is a EP by American hip hop artist Cage. It was released on on . It was released between his two collaboration albums with (Nighthawks) () and () () and features guest appearances from both.

*"Weather People" uses the theme music from "".
*"Haterama" is part one of a set of disses against Boston rapper Esoteric, which stemmed from problems with Esoteric and . The last of this beef was 's eight minute single, "7700 Years To Date".
*"Summer In Hell" was referred to by on one of the many demos from .
*A verse from "Underground Rapstar" was first used on the Weathermen Mixtape (The Conspiracy), on the track "Every rapper in the house shut the fuck up".