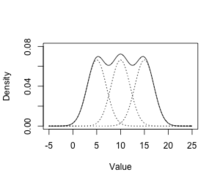 Density of a mixture of three normal distributions (μ = 5, 10, 15, σ = 2) with equal weights. Each component is shown as a weighted density (each integrating to 1/3)

This type of mixture, being a finite sum, is called a finite mixture, and in applications, an unqualified reference to a "mixture density" usually means a finite mixture. The case of a countable set of components is covered formally by allowing n=∞.

The mixture components are often not arbitrary probability distributions, but instead are members of a parametric family (such as normal distributions), with different values for a parameter or parameters. In such cases, assuming that it exists, the density can be written in the form of a sum as:

for one parameter, or

for two parameters, and so forth.

exists, and assuming that the component densities pi(x) exist,

It is a trivial matter to note that the jth moment about zero (i.e. choosing H(x) = xj) is simply a weighted average of the jth moments of the components. Moments about the mean H(x) = (x − μ)j involve a binomial expansion:[1]

where μi denotes the mean of the ith component. In case of a mixture of one-dimensional normal distributions with weights wi, means μi and variances σi2, the total mean and variance will be:

These relations highlight the potential of mixture distributions to display non-trivial higher-order moments such as skewness and kurtosis (fat tails) and multi-modality, even in the absence of such features within the components themselves. Marron and Wand (1992) give an illustrative account of the flexibility of this framework.

The question of multimodality is simple for some cases, such as mixtures of exponential distributions: all such mixtures are unimodal.[2] However, for the case of mixtures of normal distributions, it is a complex one. Conditions for the number of modes in a multivariate normal mixture are explored by Ray and Lindsay[3] extending the earlier work on univariate (Robertson and Fryer, 1969; Behboodian, 1970)[Full citation needed] and multivariate distributions (Carreira-Perpinan and Williams, 2003)[Full citation needed].

Here the problem of evaluation of the modes of a n component mixture in a D dimensional space is reduced to identification of critical points (local minima, maxima and saddle points) on a manifold referred to as the ridgeline surface

where α belongs to the n − 1 dimensional unit simplex

and Σi ∈ RD × D, μi ∈ RD correspond to the covariance and mean of the ith component. Ray and Lindsay[citation needed] consider the case in which n − 1 < D showing a one-to-one correspondence of modes of the mixture and those on the elevation function h(α) = q(x*(α)) thus one may identify the modes by solving

with respect to α and determining the value x*(α).

Using graphical tools, the potential multi-modality of n = {2, 3} mixtures is demonstrated; in particular it is shown that the number of modes may exceed n and that the modes may not be coincident with the component means. For two components they develop a graphical tool for analysis by instead solving the aforementioned differential with respect to w1 and expressing the solutions as a function Π(α), α ∈ [0, 1] so that the number and location of modes for a given value of w1 corresponds to the number of intersections of the graph on the line Π(α) = w1. This in turn can be related to the number of oscillations of the graph and therefore to solutions of

Since the above is quadratic it follows that in this instance there are at most two modes irrespective of the dimension or the weights.

For more details on this topic, see Mixture model.

Mixture densities can also be used to model experimental error or contamination – one assumes that most of the samples measure the desired phenomenon,