Mine planter and the earlier "torpedo planter" was a term used for mine warfare ships into the early days of World War I. In later terminology, particularly in the United States, a mine planter was a ship specifically designed to install controlled mines or contact mines in coastal fortifications. This type of ship diverged in both function and design from a ship operating as a naval minelayer. Though the vessel may be sea going it is not designed to lay large numbers of mines in open sea. A mine planter was designed to place mines in exact locations so that they might be fired individually or as a group from shore when observers noted a target to be at or near a designated mine's position. The terms and types of specialized ship existed from the 1860s where "torpedoes" were made famous in the American Civil War until the demise of large, fixed coastal fortifications brought on by the changes of World War II.

The earliest mines were the “torpedos” associated with harbor defenses. Thus the vessels required to place the torpedoes were termed torpedo planters with the equipment evolving with the mines. For example, the record of the Sixtieth Congress there is mention of "procurement of one torpedo planter and two launches for the Hawaiian Islands" in connection with submarine mines in Hawaiian Island defenses.[2] In the United States and some other countries there was a coastal defense “torpedo service” that required vessels capable of placing the devices and associated firing cables as early as the late 19th Century. By 1904 the first vessels specifically designed for this work were under construction[3] in the United States.

The outbreak of naval warfare in World War I saw extensive use of sea mines. The first naval ships destined to be minelayers were first termed mine planters as seen in Navy ship references.[4] The term appears to be used interchangeably in naval usage during that period.[5] For example, in an address to the U.S. Navy ships of Mine Squadron One at Portland, England Admiral Sims used the term “mine layer” while the introduction speaks of the men assembled from the “mine planters”.[6] As the distinct difference between “planting” individual mines and “laying” mine barrages by dropping large numbers of mines at sea emerged the term minelayer began to apply to the naval vessels engaged and built for this type of operation.[7]

In the coastal defense system the usage of mine planter was continued. In the United States 1918 saw the creation of the U. S. Army Mine Planter Service (USAMPS). The designation of mine planter was continued for the largest specialized ships of that service until the effective end of the service in the closing years of World War II. During that time the formal usage of Mine Planter was applied to the ships and their names were prefixed by U.S. Army Mine Planter (USAMP). The USAMPS was formally ended in 1954 by Congress in the Warrant Officer Personnel Act[8] some five years after its vessels had been dispersed.

Mine Planter Design and Function

The earliest U.S. vessels involved in the work were not specially designed for the purpose. Vessels capable of handling heavy loads over the side were drafted into the function. Some were small tugs and other commercial types. The ship required suitable rigging to lift the mines and anchors along with associated cables over the side for planting. Adequate deck space was also required for safe work and to carry the mines. Stability was also a factor aas some of the small vessels had shown themselves to be less than stable with such loads.[9] By the early days of the 20th Century the Army's experience with some of these vessels indicated a need for a design specifically adapted to the work. By 1904 the first of these ships were under construction.

The planters and associated vessels performed a number of duties beyond tending the minefields. Target towing was a specific task assigned to the vessels. They also served as observation platforms during demonstration or exercise firing of either the fortification guns or mines. In the later, cable capable vessels, they laid telephone and other communication cables within the coastal fortification systems. During Army’s summer camp for Army Reserve, National Guard and ROTC or occasional official visits they served as cruise vessels for tours and occasional entertainment. The ships were assigned transportation duty as required and when available to support Coast Artillery missions.

The first specialized Army mine planters were built in 1904 with a second group in 1909. These ships were designed to plant mines but lacked full, specialized capability to lay and maintain the minefield control cables. Some of these ships are noted in official documents as "torpedo planters" showing the evolution of terminology. Ships under Signal Corps direction assisted. One of the ships, the Joseph Henry, was taken into the Coast Artillery Corps for that purpose.

Cable ships Cyrus W. Field and Joseph Henry were associated with mine cable work[3] and next generation mine planter development[14] that incorporated cable capability into the new ships. Joseph Henry was taken in to the Mine Planter Service. The Cyrus W. Field appears listed only in association with mine cable work and with the mine planters in archival records.[15]

A year after the 1918 establishment of the Mine Planter Service the next generation of vessels specifically designed to plant and maintain the mines and cables composing the mine battery of those harbor defense systems was added to the fleet. A year later, 1920, saw a major reduction in Army and the transfer of six of these new ships to the U.S. Lighthouse Service and later U.S. Coast Guard service.

Only one ship of this class was built. She was the first fully capable cable ship and mine planter with diesel electric power. The USAMP Ellery W. Niles, captioned in a photo as "The last word in mine planters"[3][17] and a major change into a more modern and capable form. After a tour of the East Coast Niles went on to serve on the West Coast based in San Francisco.[18] 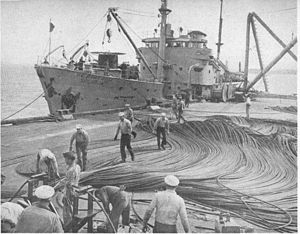 The requirement for more ships capable of planting the mines and installing and maintaining the control and communications cables of the coastal fortifications was underway on the entry of the United States into WW II. Sixteen new vessels were planned or started by that time at the Marietta Manufacturing yard at Point Pleasant, West Virginia. Those ships were delivered to the Mine Planter Service during 1942 and 1943, designated the M 1 Mine Planter and given MP numbers.[1][3]

Other Army Mine Vessels

The mine planting process required assistance by other, smaller vessels. Some, almost as capable as the planters were termed Junior Mine Planter. The Junior Mine Planters were often commercial designs with a number being conversions or special built during the war. They occasionally show up as "Mine Planter" with the "Junior" dropped. One, the General Richard Arnold, a 1909 tug, sank in the process of rescuing another mine vessel.[20] A specialized vessel, the Distribution Box Boat (DB Boat), was designed to install and maintain the distribution boxes from which individual cables branched to each mine in a mine group. A number of the later Distribution Box Boats ended up in the Navy, often becoming known simply as "Box Boats" or "Box L" boats[21] working as small service vessels or still working in harbor defense.[22] Mine Yawls and other small craft assisted in both mine work and all the other duties fitting small vessels within the fortifications in which individual forts or batteries were often separated by large bodies of water.

End of the mission

The entire concept of massive fixed fortifications was shown to be obsolete in the early days of World War II. By the end of the war the Coast Artillery Corps mission was already shifting to air defense and coast fortifications were being stripped. The Mine Planter Service ships appear to be engaged more in of their collateral duties than working the minefields.

One of the M 1 (1942–43) ships, the General Samuel M. Mills of 1942, was retained by the Army and assigned to other missions while another was sold directly to commercial interests and became a fishing vessel.[19]

By early 1944 most of the 1942-43 ships were being transferred to the U. S. Navy to be converted into a class termed the Auxiliary Minelayer (ACM/MMA)[23] with some of those vessels already working in the European Theater or headed to Japan when the war ended.

Mine planters were designed to handle heavy mines over the side rather than dropping mines astern from racks or rails as is usual in naval minelayers. As a result many of these vessels had particular applicability to the U.S. Coast Guard buoy tending role. A number of the pre WW II ships became the Coast Guard Speedwell[24] class through the U.S. Lighthouse Service (USLHS) after a 1920 reduction in the Army. Several became small cable ships. A number of the WW II constructed vessels followed their predecessors of the USLHS/USCG in going from Navy to the Coast Guard as postwar buoy tenders.