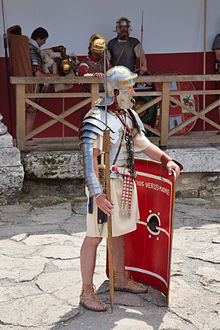 Reenactment of a second century Roman legionary wearing a manica over his right arm.

The Latin word "manica" means a sleeve.[1] A manica was a type of iron or bronze arm guard, with curved and overlapping metal segments or plates, fastened to leather straps, worn by Roman gladiators called crupellarii, and later by soldiers.

Origins and early use 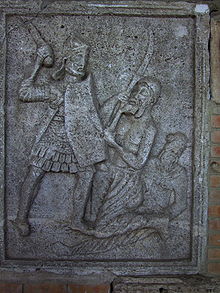 Roman troops fought crupellarii in the revolt of Florus and Sacrovir of 21CE.[2] By the time of Trajan's Dacian Wars, Roman troops were wearing manicae with the short-sleeved lorica segmentata as a protection against the falcēs, which could cut through or around the Roman legionaries' shields. Its use (along with metal greaves) is attested on several reliefs depicting that campaign, including the Tropaeum Traiani at Adamclisi and Trajan's Column. These seem to suggest that, like the lorica segmentata, it was only issued to Roman-born legionaries and not to auxiliaries. The Dacian campaign is the only one in which we have representational evidence for its use, and we do not know if its use in that campaign was widespread or rare.[3]

Distribution and later use

Finds identified as manicae have come from Newstead, Carnuntum, Richborough, Corbridge, Eining on the Danube frontier, Leon, Carlisle, and Ulpia Traiana Sarmizegetusa.[4][5][6] These suggest that the manica was in use by the Roman military during the 1st century AD, independent from the Dacian wars. The sculpture at Alba Julia provides evidence of the manica in use in the 2nd and 3rd centuries CE by the military.[4] Ammianus describes Roman cavalry on parade in 350 CE as "Laminarum circuli tenues apti corporis flexibus ambiebant per omnia membra diducti." (Thin circles of iron plates, fitted to the curves of their bodies, completely covered their limbs).[4] Around 400CE, manicae are represented on the Column of Arcadius and in the Notitia Dignitatum.[4]

Bishop lists likely components as one shoulder plate, about 35 metal (ferrous or copper alloy) strips, 90-120 leathering rivets, 3 or 4 internal leathers, and one padded lining. The lining may have been a separate component, in order to avoid it being torn by the articulated metal plates. The metal strips were about 25 to 30 mm wide and 0.35 to 0.5 mm in thickness; they were longer at the top of the arm. Each strip had holes at its lower edge, through which flat-headed copper alloy rivets passed from the inside to hold the leather straps in place. It also had a hole punched at each end, which did not have a rivet and presumably served as an attachment point for an organic fastening. The lower few plates were in some cases riveted together, rather than articulated on leather. One depiction appears to show a manica terminating in a hand shape.[7]

The usual arm position depicted for Roman swordsmen is with the upper arm vertical and close to the torso, the forearm extended horizontally with the thumb uppermost. The plates were probably not long enough to cover the whole circumference of the arm, but would have extended from the upper arm down to the thumb, leaving an unprotected area at the back. The plates overlapped upwards, directing any blow to the inside of the elbow which had a particularly dense coverage of multiple plates.[7]

The World of the Gladiator- Susanna Shadrake

A Roman Frontier Post and its People- James Curle