The magazine focussed on upper managers in Polish business. The title had a print run of 50,000 copies, copy price at 9.80 Złoty[2] and sold around 30,000 copies at outlets and via subscription. The magazine was registered at the Polish auditing association ZKDP[3]. The Editor-in-chief for the launch was business journalist Jan Bazyl Lipsczyc. In 2006 Dorota Goliszewska became editor-in-chief. Deputy editors were Dorota Kornacka and Piotr Lemberg. The CEO was Philipp Busch, and later Nikolaus von Nathusius.

Beside the main title Manager Magazin, the company published special issues on specifically focused topics. With the brand Manager Eventy several kinds of events were organized also: gala events for proprietary-award ceremonies, seminars and workshops. In October 2008 a conference with nobelist Joseph Stiglitz was organized in Warsaw[4].

A change in the Spiegel-group management in 2008 resulted in a change of their foreign investments strategy. Based on the decision to generally withdraw from foreign countries activities[5][6][7], and due to an expected major decrease of advertising revenues following the economic contraction resulting from the world financial crisis, the title and company were closed down at the end of 2008[8][9]. 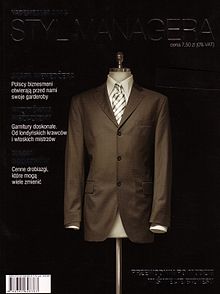 Other publications of the company have been closed down too: