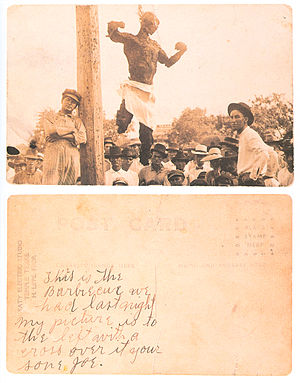 A postcard showing the burned body of Jesse Washington on display in Robinson, Texas, seven miles from the place of lynching in Waco. The back reads: "This is the barbecue we had last night. My picture is to the left with a cross over it. Your son, Joe."

The Jesse Washington lynching, or Waco Horror, was the disfigurement, torture, and lynching of a 17-year old African American farmhand from Waco, Texas, United States, on May 15, 1916.[1] Washington's killing occurred after he was found guilty in a one-hour long trial for the rape and murder of a wealthy 53-year old woman. Sources conflict as to whether Washington's guilt was ascertained at the trial; although he signed a confession, which was published widely in several local newspapers, Washington was by all accounts illiterate.[2][3] Some sources indicate that Washington was mentally handicapped.[3]

The incident's modern infamy is in large part due to the numerous extant photographs of the youth's mutilated body, including postcards which were marketed for commercial purposes.[4]

Washington was arrested on May 8, 1916, charged with having raped and murdered Lucy Fryer (53), the wife of a well-to-do cotton farmer in Robinson, Texas, on the outskirts of Waco, Texas. Fryer was found bludgeoned to death. Washington was detained in Dallas in the days leading up to the trial. Due to tremendous public pressure, exacerbated by the local press, he was transferred back to Waco and put on trial a week later.[5][6]

The trial took place on May 15, before a jury of twelve white men. It lasted an hour, and the jury deliberated for four minutes, before finding him guilty, and sentencing him to death.[7] A mob immediately seized him without resistance from the authorities.

The mob put a chain around his neck and dragged him to the town square, where a bonfire was being prepared.[8] On the way, the mob beat him with bricks, stones, and shovels, and stripped away his clothing.[8] According to the Waco Times-Herald, "People pressed forward, each eager to be the first to light the fire, matches were touched to the inflammable material and as smoke rapidly rose in the air, such a demonstration as of people gone mad was never heard before."[8]

A pile of wooden boxes had been set up at the base of a tree, where Washington was reportedly castrated and doused with coal oil.[8] The chain was secured to a tree limb, and Washington was hoisted above the flame.[8] He made numerous attempts to climb the hot chain, and the crowd cut off his fingers to prevent his escape.[9] The boy was raised and lowered into the flame in front of a crowd of approximately 15,000 people.[10] It is not known how long he lasted before he died, but the mob let him burn for over an hour. Within two hours, Washington's corpse had been reduced to little more than a charred torso and skull.[8] Onlookers were seen to collect pieces of Washington's bones, either as personal souvenirs or for sale to others.[2]

The bodily remains were then taken down from the tree and dragged through the streets of downtown Waco. Eventually, the remains were placed in a sack, which was taken to the town of Robinson, where it was hung on display in front of the blacksmith's shop.[2] Later in the afternoon the sack was retrieved by a Constable, who took it to the Waco undertaker for burial.[8]

Photographer Fred Gildersleeve took photographs of the lynching, which he sold as postcards.[8] By July 1916, Gildersleeve stated that he had stopped selling the postcards, because some influential Wacoans were concerned about "bad publicity".[11] Several newspapers had condemned the events in op-ed pieces around the country.[12] A New York Times article had opined that "in no other land even pretending to be civilized could a man be burned to death in the streets of a considerable city amid the savage exultation of its inhabitants."[13]

NAACP secretary Roy Nash asked Elisabeth Freeman, who had been hired by the Texas Woman’s Suffrage Association, to investigate the details of the lynching. She proceeded to Waco, where she interviewed most of the parties involved, including the judge, the sheriff, and the husband of Lucy Fryer. She ultimately concluded that while the alleged rape of Lucy Fryer never occurred, Jesse Washington probably did kill her.[14] Freeman attributed this conclusion to the location of the murder weapon and the blood on Washington's clothing, and the absence of any other suspects after her comprehensive investigation of the case.[14] Freeman's report was the basis of a July 1916 article in The Crisis by W. E. B. Du Bois, entitled The Waco Horror.[11]

The Paul Quinn Weekly newspaper, of Paul Quinn College, published several reports critical of the lynching and of local authorities. In one piece, which had originally been published in the Chicago Defender, the author proclaimed Jesse Washington innocent, and accused the victim's husband of committing the murder.[5] A. T. Smith, the African-American editor of the newspaper, was subsequently arrested for permitting the allegation to be printed, and convicted of criminal libel.[5] Smith was sentenced to, and served, a year in prison with hard labor.[15]

No charges were brought against anyone involved in the lynching of Jesse Washington, despite the fact that lynching was a crime in Texas at that time.[5]