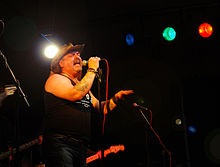 As a youngster, he enjoyed a successful choir career at Pershore Abbey, singing solo with the Vienna Boys' Choir circa 1972, 'Jesu, Word of God Incarnate' (Ave Verum)

In 1982 he joined new wave of heavy metal band, Scorched Earth as the band's lead singer Dave Cooper
Scorched Earth The band were signed to Carrere Records and enjoyed success with the 4 track EP 'Tomorrow Never Comes', released in 1985, which is still to be found in current editions of the Rare Record Guide.

During his eighties career, the band supported rock legend Bryan Adams at the Hammersmith Odeon in 1985, performed for Radio One in Concert and the BBC Sessions. For twenty years he went on tour with a variety of notable artists, providing back stage production, before coming out of singing retirement in 2008 to form original rock band BADLAND Ready to Roll Interview In 2011, as a solo artist, he released his first track for nearly 30 years...'Lord's Prayer'.