Credit rating agencies played a very important role at various stages in the subprime crisis. They have been highly criticized for understating the risk involved with new, complex securities that fueled the United States housing bubble, such as mortgage-backed securities (MBS) and collateralized debt obligations (CDO).

The Financial Crisis Inquiry Commission reported in January 2011 that: "The three credit rating agencies were key enablers of the financial meltdown. The mortgage-related securities at the heart of the crisis could not have been marketed and sold without their seal of approval. Investors relied on them, often blindly. In some cases, they were obligated to use them, or regulatory capital standards were hinged on them. This crisis could not have happened without the rating agencies. Their ratings helped the market soar and their downgrades through 2007 and 2008 wreaked havoc across markets and firms."[1]

Impact on the crisis

Credit rating agencies are now under scrutiny for giving investment-grade, "money safe" ratings to securitization transactions (CDOs and MBSs) based on subprime mortgage loans. These high ratings encouraged a flow of global investor funds into these securities, funding the housing bubble in the U.S.[2] An estimated $3.2 trillion in loans were made to homeowners with bad credit and undocumented incomes (e.g., subprime or Alt-A mortgages) between 2002 and 2007. These mortgages could be bundled into MBS and CDO securities that received high ratings and therefore could be sold to global investors. Higher ratings were believed justified by various credit enhancements including over-collateralization (i.e., pledging collateral in excess of debt issued), credit default insurance, and equity investors willing to bear the first losses. Economist Joseph Stiglitz stated: "I view the rating agencies as one of the key culprits...They were the party that performed the alchemy that converted the securities from F-rated to A-rated. The banks could not have done what they did without the complicity of the rating agencies." Without the AAA ratings , demand for these securities would have been considerably less. Bank writedowns and losses on these investments totaled $523 billion as of September 2008.[3][4]

The ratings of these securities was a lucrative business for the rating agencies, accounting for just under half of Moody's total ratings revenue in 2007. Through 2007, ratings companies enjoyed record revenue, profits and share prices. The rating companies earned as much as three times more for grading these complex products than corporate bonds, their traditional business. Rating agencies also competed with each other to rate particular MBS and CDO securities issued by investment banks, which critics argued contributed to lower rating standards. Interviews with rating agency senior managers indicate the competitive pressure to rate the CDO's favorably was strong within the firms. This rating business was their "golden goose" (which laid the proverbial golden egg or wealth) in the words of one manager.[5]

Author Upton Sinclair (1878–1968) famously stated: "It is difficult to get a man to understand something when his job depends on not understanding it."[6] This competitive pressure and the resulting profits gave a personal financial incentive to management to lower standards.

Internal rating agency emails from before the time the credit markets deteriorated, discovered and released publicly by U.S. congressional investigators, suggest that some rating agency employees suspected at the time that lax standards for rating structured credit products would produce negative results.[7] For example, one email between colleagues at Standard & Poor's states "Rating agencies continue to create and [sic] even bigger monster--the CDO market. Let's hope we are all wealthy and retired by the time this house of cards falters."[8]

Critics claim that conflicts of interest were involved, as rating agencies are paid by the firms that organize and sell the debt to investors, such as investment banks.[9] John C. Bogle wrote in 2005 that there is an inherent conflict of interest when a professional firm is also publicly-traded, as the pressure to grow and increase profits is relatively stronger, which may detract from the quality of work performed.[10] Moody's became a public firm in 2001, while Standard & Poor's is part of the publicly-traded McGraw-Hill Companies.

Rating actions during the crisis 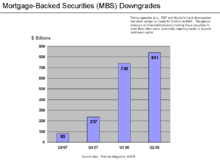 Rating agencies lowered the credit ratings on $1.9 trillion in mortgage backed securities from Q3 2007 to Q2 2008, another indicator that their initial ratings were not accurate. This places additional pressure on financial institutions to lower the value of their MBS. In turn, this may require these institutions to acquire additional capital, to maintain capital ratios. If this involves the sale of new shares of stock, the value of existing shares is reduced. In other words, ratings downgrades pressure MBS and stock prices lower.[12]

Credit rating agencies help evaluate and report on the risk involved with various investment alternatives. The rating processes can be re-examined and improved to encourage greater transparency to the risks involved with complex mortgage-backed securities and the entities that provide them. Rating agencies have recently begun to aggressively downgrade large amounts of mortgage-backed debt.[15] In addition, rating agencies have begun taking action to address perceived or actual conflicts of interest, including additional internal monitoring programs, third party reviews of rating processes, and board updates.[16]