The Comprehensive Soldier Fitness (CSF) is a program of the United States Army that was launched in October 2009.[1] With the long wars in Afghanistan and Iraq, many soldiers experienced financial, marital and other personal problems, presumably due to serial deployments and spending significant periods of time away from their families. The Army approached the University of Pennsylvania Resiliency Project team[2] with developing a program for the Army to teach resiliency to Soldiers. After the expenditure of approximately $117 million, a program was developed. They developed the Master Resilience Training program (MRT)[3] as a part of the Comprehensive Soldier Fitness program. Brigadier General Rhonda Cornum is the director of the CSF program. (As a side note, Gen. Cornum was a prisoner of war during the Gulf War and mistreated by her captors.[4])

An Army of balanced, healthy, self-confident Soldiers, families and Army civilians whose resilience and total fitness enables them to thrive in an era of high operational tempo and persistent conflict.[5]

Develop and institute a holistic fitness program for Soldiers, families, and Army civilians in order to enhance performance and build resilience.[5]

Improved Soldier performance and readiness. Build confidence to lead, courage to stand up for one's beliefs and compassion to help others. Comprehensive Soldier Fitness is about maximizing one's potential.[5]

Master Resilience Training (MRT) is a program that developed from Battle Mind Training. Battlemind Training was a military program launched in 2007[6] that also intended to equip soldiers with the ability to bounce back from adversity, stress, and trauma. In 2009 the Army was working with University of Pennsylvania psychologists to develop resiliency experts in the military as part of CSF, with the goal of having MRT experts in every company helping to monitor and develop the 5 components of CSF.[7] 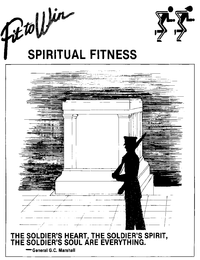 "Spiritual fitness" programs have had a long history in the Chaplains Corps.

In 1987 the Army published a wellness program called, "1,2,3, fit to win!"[9] The program was concerned with the emotional, spiritual, and physical fitness of soldiers. From the pamphet describing the program from 1987, it stated that, "All aspects of total wellness addressed by the Army Health Promotion Program come under the physical, emotional, and spiritual dimensions of human beings. A great amount of training time is devoted to physical health and conditioning. This is a positive effort and appropriate for our mission accomplishment, however, TOTAL fitness also involves emotional and spiritual aspects!"[9]

Army regulation 165–1 from 2006 defined "spiritual fitness" as a responsibility of the Chaplains Corps.[10]

"Army Well-being is the personal—physical, material, mental, and spiritual-state of the Army Family, including Soldiers (active, reserve, and guard), retirees, veterans, DA civilians, and all their Families, that contributes to their preparedness to perform and support the Army’s mission. The focus of Army Well-being is to take care of our Army Family before, during, and after deployments."[11] 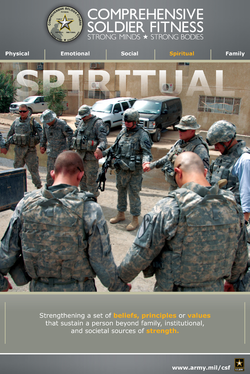 The CSF program is not without criticism.[12] Spending $117 million tax dollars on a program that isn't fully supported with hard scientific evidence that it will work has raised questions about whether the program was started in order to promote a certain type of religiosity. Religious "spiritual fitness" initiatives have existed prior to CSF; however, the spiritual fitness initiatives are now being promoted as though they were secular initiatives. The focus of the non-religious/non-spiritual Pennsylvania Resiliency program was mostly on adolescent depression treatment.[13] There is currently no peer reviewed research that shows any given religious belief necessarily advances mental health. According to the fourth edition of Psychology of Religion by Hood, et al., "The study of positive psychology is a relatively new development...there has not yet been much direct empirical research looking specifically at the association of religion and ordinary strengths and virtues."[14] In a review of the literature on the relationship between religiosity/spirituality and PTSD, amongst the significant findings, about half of the studies showed a positive relationship and half showed a negative relationship.[15] In practice, due in part to the disproportionate representation of Evangelical Christians in the Chaplains Corps,[16] and the delegation of administrative authority of CSF programs to chaplains "spiritual fitness" often manifests as a promotion of evangelical Christianity despite the lack of secular justification. For example, numerous complaints have been made about evangelical Christian rock concerts being paid for by the military under the banner of "spiritual fitness". Some atheists, Muslims, Jews, and members of various denominations of Christianity have alleged that they were coerced into attending these concerts.[17][18][19][20] In response, an atheist in Ft. Bragg had planned a "Rock Beyond Belief" concert, but the Army was not willing to offer equal funds or support for the atheist concert as it had for the Christian concerts.[21]

The GAT test[22] which is intended to measure fitness in all CSF's dimensions, has five questions designated to measure spiritual fitness.[23] Some atheists have complained that this test may discriminate against non-believers.[24] CSF has maintained that the questions are secular but that "spiritual fitness" can also be religious. The questions have been abstracted from a Multidimensional Measurement of Religiousness/Spirituality developed by the Fetzer Institute in 1999.[25] Concerns have been raised that the abstracted questions used to measure spirituality in the GAT test have been selected because they correlate with the more extensive and explicit measures of religiosity. While commanders will not have access to individual scores, soldiers are referred to modules and chaplains for remedial training to increase their scores in the various dimensions, including "spiritual fitness".

The remedial training modules for a low score on the GAT's "spiritual fitness" component of CSF[26] has been criticized thoroughly by MAAF.[27] One of these criticisms is that CSF distorts the meanings of "spirit," "spirituality," and "prayer" to appear secular. For example, the remedial training module for those who score low on "spiritual fitness" defines and promotes "prayer" as follows.

Spiritual fitness centers are being developed to train soldiers in resiliency and to offer general support towards the goal of CSF. These centers are often only subtle modifications of existing chapels. For example, the Spiritual Fitness Center in Ft. Hood, in actuality, is no different than a normal chapel in the military. Inside it you will see crosses, Christian “Our Daily Bread” pamphlets, Bibles, an interactive touch-screen television that guides the viewer through Pastor Rick Warren’s Purpose Driven Life, a touch-screen television that guides the viewer through Joyce Miller’s Christian book Battlefield of the Mind, stained glass windows, an altar, and pews.[29] Ft. Sill's spiritual fitness center reflects the syncretism between psychology, Christianity, and Eastern traditions that is common to the New Age Movement.

Though some of the spiritual fitness centers/resiliency centers operate in a church, Ft. Sill has created its own center that it calls a Resiliency Training Campus out of the Religious Support Operations Center. The emblem on the building says that the center is concerned with the mind, body, and spirit. This emphasis is arguably Greco-Roman in origin, but it is also characteristic of New Age holistic views of health. (In either case, it is an emphasis that does not properly characterize positive psychology or Christianity.) It is an emphasis of its own. The center offers over 200 classes, a meditation room, a children’s play room, a library with books designed to bolster resiliency, and a counseling room. The counseling room is for spiritual counseling. The books offered in the library are mostly a blend of psychology and Christianity. These books include Getting Ready for Marriage by Jerry D. Hardin and Dianne C. Sloan, a Biblical marriage counseling workbook; I Will Never Leave You by Gail and Hugh Prather, a New Age book that draws heavily on Christianity; Love and Will by Rollo May, which relies heavily on Jungian psychology; Love is a Decision by Gary Smalley, which focuses on family relationships from a Christian perspective; Made for Each Other by John W. Drakeford, who is also known for his book The Christian View of Homosexuality; and several other marriage counseling books that attempt to blend psychology, Christianity, and/or New Age holistic thought.[30]

Some have argued that the CSF program is a syncretic new religious movement that blends Army values, Christianity, and positive psychology to make CSF an aspect of the larger new age movement. Some commanders are unsure as to how "spiritual fitness" can be taught or how it applies to an atheist.[31]

CSF's "spiritual fitness" goal is being developed in a military culture that is increasingly hostile to those without religious beliefs.[32][33][34][35][36][37]

The first person to criticize the program appears to be blogger from Yahoo! Answers in November 2010.[38]

The Army has done little to address the criticisms of the CSF program, with the exception of removing a portion of the spiritual fitness training module that claimed that the flag folding ceremony had an officially Christian meaning.[39]