Bludgeoning Angel Dokuro-Chan (撲殺天使ドクロちゃん, Bokusatsu Tenshi Dokuro-chan?) is a Japanese light novel series written by Masaki Okayu and illustrated by Torishimo. It centers on a teenage boy and a killer angel from the future who constantly gets him into trouble and kills him violently and repeatedly with a spiked club, only to resurrect him seconds later. The novels were first serialized in the Dengeki hp magazine published by MediaWorks. Later, a manga version was created, written and illustrated by Mitsuna Ouse serialized in Dengeki Comic Gao!. Finally, an anime version was adapted and aired in Japan between March and September 2005. A second anime series aired between August and November 2007.[1] In late 2005, a PlayStation 2 game titled Game ni Natta yo! Dokuro-chan: Kenkō Shindan Daisakusen was released in Japan.

Bokusatsu Tenshi Dokuro-chan tells the story of a 13-year-old junior high schooler, Sakura Kusakabe, who, twenty years in the future, while attempting to create a "Pedophile's World" forces all women to stop aging after the age of twelve, offends God by the side effect of having created immortality. Dokuro Mitsukai, a member of an order of assassin angels that are called Rurutie, has been sent from the future to kill him. Believing that Sakura can be redeemed, Dokuro decides instead to keep Sakura so occupied that he can never develop the immortality technology. Due to her impulsive nature and super-human strength however, she frequently kills him with her gigantic spiked kanabō (club), Excalibolg, on a moment's impulse, but returns him to life moments later with angelic power. Sabato, another assassin of the Rurutie order who uses her feminine wiles to do her job, is dispatched to complete Dokuro's original mission: Sakura's assassination.

Sakura Kusakabe (草壁桜?)
Voiced by: Reiko Takagi (Japanese), Johnny Yong Bosch (English)
Sakura is a 14 year-old second year junior high school student whose life changed the day the "Bludgeoning Angel" Dokuro-chan appeared. From that day on, he went from the life of a normal boy to one filled with bloody clubbings by an angel. In the future, Sakura is apparently destined to create a technology that stops girls from aging after they reach the age of twelve years, which has led to Sakura gaining a reputation as a pedophile around his school (though this is only because the male population are jealous of him having two heart-breakingly beautiful angels attracted to him). While not perverted by nature, Sakura still manages to get into tricky situations with Dokuro and her sister, Zakuro. Sakura has a crush on his classmate and childhood friend, Shizuki Minakami, whom he spends much of his time with but is too afraid to confess his feelings. Despite gradually developing feelings for Dokuro even with the way she treats him, Sakura continues to pursue after Shizuki, even going on a date with her which ultimately fails when Dokuro and Sabato intervene.

Dokuro Mitsukai (三塚井ドクロ?)
Voiced by: Saeko Chiba (Japanese), Wendee Lee (English)
Dokuro is a 14 year-old cute bludgeoning angel of Rurutie (a committee of angels that protect the domain of God) from the future brought back through time to kill Sakura Kusakabe, but decides to save him instead after falling in love with him. As a result, Dokuro vowed to stay by his side to protect him from any of the dangers which may appear. She wields the magical spiked kanabō (club), "Excalibolg", which she uses to brutally club her victims to death to express her displeasure (almost exclusively to Sakura). Dokuro has super-human strength and endurance (because of this she often underestimates her own strength and harms Sakura), and is also capable of bringing anyone back to life with Excalibolg by chanting "Pipiru piru piru pipiru pi". She also can, and does, use her magic to cause humans to transform into animals or to completely erase them from existence, mainly as an excuse to pair up with Sakura. When she is not brutally killing Sakura she teases him mercilessly, mostly using sexual innuendo to activate his more carnal side. Eventually, she founds a school club dedicated to watching wood glue dry, after gaining a teacher's approval using some sort of torture involving "the nerves of your teeth". She promptly coerces Sakura into becoming its second member (by sticking him onto a board and leaving him there until he joins) and has stated her desire to achieve the national championship in this particular 'sport'. As of the second season, Dokuro has become more "comfortable" with Sakura seeing her nude.

Sabato Mihashigo (三橋檎サバト?)
Voiced by: Rie Kugimiya (Japanese), Laura Bailey (English)
Sabato is another angel sent from the future to assassinate Sakura before he can create his "Pedophile's World". Also with super-human strength, she has ram horns on her head. After Sabato was defeated, she began to live in a small cardboard box under a bridge. Her living allowance is funded from an unknown source. Her weapon is the deadly shock-baton, "Durandal" (which she can "char blue whales in the blink of an eye). It is later revealed that her mother is Babel Mihashigo, the chairman of Rurutie and the main instigator in the operation to kill Sakura. Until Sabato is able to kill Sakura, she is not allowed to return back to her domain. Even though Dokuro and Sabato are on opposite sides of the operation, they are actually friends and hang out with one another when they are not fighting over Sakura.

Zansu (ザンス?)
Voiced by: Nobuo Tobita (Japanese), Kirk Thornton (English)
Zansu is yet another angel from the future who has accompanied Dokuro in the attempt to save Sakura's life. His appearance is very odd, looking more like a member of a biker gang. Unlike the other angels, Zansu is often on the receiving end of the stick whenever he makes an appearance around Sakura. His trademark pink mohawk is his most defining trait. It is later revealed that he has a hidden camera in it which he uses to take erotic pictures of Zakuro. He is, unfortunately, revealed to have some perverted tendencies and is frequently nude in the second series. Every sentence Zansu says ends in "Zansu". Sakura describes him as a "has been-death metal punk" and a "pedophile."

Zakuro Mitsukai (三塚井ザクロ, Mitsukai Zakuro?)
Voiced by: Akeno Watanabe (Japanese), Dorothy Fahn (English)
Zakuro is a nine-year-old angel (although she looks at least nine years older for her age) with a far larger bust size than her older sister, Dokuro. She has the super-human powers of most angels and wears the clothes of a naval officer's uniform, as well as an eyepatch on her left eye for unknown reasons. Zakuro is unusually polite, addressing people with the formal "-san" suffix after their names rather than the informal "-kun" or "-chan". Calm and soft-spoken, she is quite proficient in battle. Her weapon is a wet towel called "Eckilsax" which can split into two or more for close combat, as well as stretching itself to bind opponents. In the second series, she moves in with Sakura and Dokuro. Zakuro seems to get on well with Sakura and appears to have a crush on him, although she sometimes suggests that Dokuro kills Sakura only to realize what she's saying and apologize (but is usually too late by then).

Shizuki Minakami (水上静希, Minakami Shizuki?)
Voiced by: Ayako Kawasumi (Japanese), Mela Lee (English)
Shizuki is 13 years old and one of Sakura's classmates as well as his childhood friend. Much like the rest of Sakura's classmates, Shizuki is unfazed with the chaos which the angels introduce. It is noteworthy however that while Sakura's classmates think that he is a pedophile and treat him with contempt and jealousy, Shizuki believes him to be a good person and is the only character to stick by him amongst the chaos. Shizuki seems to have a crush on Sakura but like Sakura is also unable to confess her feelings to him. She is a bit jealous of Dokuro because of how much attention Sakura gives her (mostly out of responsibility for her actions) but seems to care about her all the same.

Dokuro-chan first began as a light novel series originally created by Masaki Okayu and illustrated by Torishimo was first serialized in the Japanese manga magazine Dengeki hp published by MediaWorks. There are ten individual light novels in the series.

There is also a single volume of short stories written by other popular light novel authors.

The manga version of Dokuro-chan written by Mitsuna Sakuse and illustrated by Mitsuna Ouse was first serialized in the magazine Dengeki Comic Gao! published by MediaWorks.

The first season of the Dokuro-chan anime first aired in Japan on March 12, 2005 and contained eight episodes in length. Each of the eight episodes is less than 15 minutes in duration, though they were aired in pairs which totaled four parts that were each 25 minutes in length including the opening and ending songs. The second season of Dokuro-chan anime first aired on August 11, 2007, with a DVD box set release date of August 24, 2007. The second season ran for four episodes, and is released in two parts consisting of two episodes each. In the TV airings, some of the more violent or dubious scenes are replaced with an image of a beach and one of the students that were transformed into animals, leaving just the audio. New changes were made with the second season, such as Dokuro's hair color changing to blue, Zakuro moving in with them both, the only appearance of Sabatos mother, and the animation being slightly different from the first season. 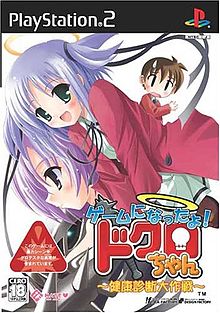 In late 2005, a video game based on the series entitled 'Game ni Natta yo! Dokuro-chan: Kenkō Shindan Daisakusen (ゲームになったよ!ドクロちゃん〜健康診断大作戦〜?, lit. It's a Game Now! Dokuro-chan ~ Great Health Diagnosis Strategy) was released in Japan. The game was given a 18+ rating from CERO, because of highly disturbing violence and nudity. The game was re-rated as "D" (17+) on their website since this game was released while the "D" rating was not created. In the game, Sakura meets a new angel named Benomu. The game is set up as a visual novel where the player has to pick which opinions to go with. This game features the affection system, where the main character Sakura has to spend time with one of the six girls to maximize their heart meter and get the good ending for that character. Even though this game features voices, the minor characters still remains un-voiced, which results in only viewing text written on the screen while the character is silent. "Zansu" is one example. The voiced characters only include: Sakura, Zakuro, Dokuro, Benomu, Sabato and Shizuki.

There are videos in the game, but are recycled from the TV anime. The extremely violent scenes are censored by only showing a white screen with blood splatting all over it. However, the CG is all new and the game has over 90+ pictures. There are five mini-games added together in the game. Once the games are completed, the players gets a CG from the character of the player's choice. A challenge mode in the mini-game section is opened afterwards, where the player has to score 100 points on those five games to be able to make available a last chapter where Sakura dreams where all girls turn twelve-years-old; this chapter includes the remaining CGs of the characters.

Dokuro also appears as a playable character in the game, Dengeki Gakuen RPG: Cross of Venus for the Nintendo DS and as a cameo costume for the main character in Nippon Ichi Software's Z.H.P. Unlosing Ranger VS Darkdeath Evilman for the Playstation Portable.