Attila Csáky, works under the professional name of Choky Ice (Choky being a deliberate misspelling of csoki - chocolate in Hungarian. Which is loosely translated into English as "white chocolate")[2] and considers himself lucky, since he is doing what he always wanted to. He said, "Even in kindergarten I knew what I wanted to become, but of course I couldn't define it. Later I started to 'consume' women involuntarily." Attila broke into the business approximately 15 years ago, getting in touch with already known female stars who then suggested to their directors they try him out. "Usually the most difficult thing is to correspond with the cameras, but it was very easy for me, right from the beginning," he explained proudly, adding, "Even my parents were encouraging me to do it." But everything, he acknowledges, has its price. He faces harsh critique whenever people recognize him on the street, telling him he should "be ashamed of himself."

"There is no reason for me to feel ashamed, I am proud of what I'm doing. At least I have a job and most of these people are only jealous. They all seem to forget, that it is hard work. It is not like having sex with your wife where you can actually enjoy it. In my line of work you have to concentrate on the cameras, the director and the girls."

He is even planning to direct his own movies - hoping to only work behind the cameras one day.[3] 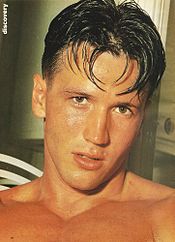 In September 1999, Attila was selected to pose nude in a pictorial for adult mainstream magazine Playgirl. Accompanying him was the caption, "Love Seat: Make Room For Amorous Jimmy Nchols!"

"I meet lots of girls," he says, smiling. "They slip phone numbers in my tip jar or sometimes invite me to after-hours parties."

Has anyone managed to snag this stud for longer than an evening? "Not yet. I'm always hoping, though. Every time that front door opens I think. This could be the one. My life can totally change right now."

How will he recognize her when she finally appears? "We'll have instant chemistry, and just like me, she'll be a total night owl and a crazy dancer. She won't want to leave until 4 a.m., making me dizzy with lust as I think about the passion ahead."

Where would you make love to this fantasy woman? "On the couch, of course- but that's not the only place. I'd take her into the bathroom and have sex in front of the mirrors. The customers might see us, but I love the thrill of possible discovery. One of my major fantasies is that she gives me head while I work. I'd be taking peoples' coats and belongings, chatting them up, all the while trying not to scream because it feels so good."