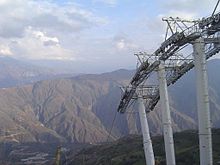 Chicamocha National Park (Spanish:Parque Nacional del Chicamocha) also known as Panachi is a Colombian Natural park along the Chicamocha Canyon (Cañón del Chicamocha) located 50 km from the city of Bucaramanga, Santander. The site is a tourist attraction due to is spectacular landscape and the variety of outdoor activities that it offers such as paragliding, spelunking, bushwalking, camping, fishing, kayaking, rafting, mountain climbing, etc. Cultural activities include the Museo Guane, Plaza de los Costumbres and the Salón de Exposiciones.[1]

The park is served by a 6.3 km length cable car system. It is one of the longest systems of its type in the world. The system goes across the canyon from the station "Mesa de los Santos" to Panachi. It has three stations: The first one is located inside the park, the middle one next to the river and the last one in the "Vereda el Tabacal".

Opened in January 2009 it quickly became popular for all its attracions but the cable car became even more famous and this is in the Santander Region.