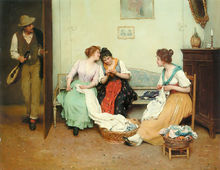 It is speculated that the phrase may come from women chatting while sewing.

"Chew the fat" or "chew the rag"[1] are English expressions for gossiping or making friendly small talk; the former being mainly in American vernacular and the latter being in British.[2]

Although some sources attribute the phrase "chew the fat" to sailors, who during a period of resting and conversing, or while working together,[2] would chew on salt-hardened fat,[3] there are no reliable historical recordings of this practice. It has even been suggested that the phrase is derived from a practice by North American Indians or Inuit of chewing animal hides during their spare time, and even of British farmers chewing on smoked pork,[4] but again, there remains to be no evidence supporting these claims, and would requires accepting a great deal of uncertainty in connecting the phrase from nautical origins to its modern metaphorical use.[2]

There are also claims that the phrase is synonymous with the action of chewing fat, or simply an allusion to the movement of the mouth during chewing.[5] Noting that fried fat is appealing in taste, it was regarded as a treat that someone could chew on for as long as possible to gain the most out of it.[6]

According to the Oxford English Dictionary, "Chew the fat" first appeared in 1885 in a book by J Brunlees Patterson called Life in the Ranks of the British Army in India. He implied it was a kind of general grumbling and bending of the ears of junior officers to stave off boredom, a typical part of army life.[7] Patterson also uses "chew the rag" in the same sentence he used "chew the fat", but it is not the oldest occurrence.[7]

Appearing first in print from 1875 in "Random House Historical Dictionary of American Slang", the excerpt reads:

"Gents, I could chew the rag hours on end, just spilling out the words and never know no more than a billy-goat what I’d been saying."[7]

It is speculated that this phrase is related to cloth, when ladies would work in "sewing circles",[8] or that women may have gossiped while quilting.[2]

The first appeared synonymously as early as 1885,[5] in J. Brunlees Patterson's "Life in the ranks of the British army in India and on board a troopship", which listed the terms in succession:

"..whistling, singing, arguing the point, chewing the rag, or fat, or other voluble and noisy inflictions, such as the screeching and gabbling of parrots and yelping of canines.."[9]

It was used as a way to describe complaining or grumbling,[5] typically by the military.

It was not until 1907 that the phrase "chew the fat" was used to express partaking in idle conversation,[5] for a friendly talk, or a gossip session.[8] It has also been used to a way to define telling tall tales.[10]

Chewin' the Fat was the title of a Scottish comedy sketch show, starring Ford Kiernan, Greg Hemphill and Karen Dunbar. Chewin' the Fat first started as a radio series on BBC Radio Scotland.

Chew-The-Fat.com is a UK-based website hosting a web forum, described as "The chat forum your mother warned you about", devoted to chat, gossip, and humorous banter and cartoons.[13]

In 1999, a widespread hoax called "Life in the 1500s", false information was circulated through email regarding "chew the fat".[14] Among offering explanations for many phrases, the email stated:

"When company came over, they would bring out some bacon and hang it to show it off. It was a sign of wealth and that a man "could really bring home the bacon." They would cut off a little to share with guests and would all sit around and "chew the fat.""[15]

This caused reexamination of many folk phrases and idioms, which had falsified many phrase etymologies.[10][14][16] Although it has been widely accepted as accurate,[7] this misinformation has since been dispelled.