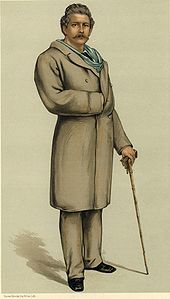 Lawes was born at Teignmouth, the only son of Sir John Lawes of Rothamsted. He was educated at Eton and Trinity College, Cambridge.[1] At Cambridge he won the Colquhoun Sculls in 1862 and won the Diamond Challenge Sculls at Henley Royal Regatta in 1863.[2] He excelled in the university distance running events and received an athletics Blue in 1864 for the mile at the Inter University sports, which he won again in 1865. He was a rowing Blue in 1865 when he stroked the losing Cambridge crew in the Boat Race but was in the winning crew of the Ladies' Challenge Plate at Henley. He was beaten by Edward Michell in the Diamond Challenge Sculls in 1865, but won the Wingfield Sculls beating Walter Bradford Woodgate.[3] In 1865 he was the Amateur Athletics Club champion for the mile.

Lawes decided to become a sculptor, and began his training in London under John Henry Foley RA. In 1869 he studied under Hugo Hagen in Berlin. He rented a studio in Chelsea, and in 1872 he exhibited his first work at the Royal Academy "Girl at the Stream". In 1878 he won an honourable mention at the Paris Universal Exhibition. Further exhibits at the Royal Academy were "Daphne" in 1880 and "The Panther" in 1881.[4] Lawes also carried out work for the scientific side of the Lawes Agricultural Trust, founded by his father, and became its chairman.

In 1882 Lawes was involved in a libel case after he had imputed in the magazine Vanity Fair and elsewhere that another sculptor, Richard Claude Belt, was dishonest for taking credit for work done by someone else. The long trial—the last one to be heard by the High Court of Justice in Westminster Hall—occupied the court for 43 sittings and excited much public interest at the time. The question at issue was how much a sculptor may be aided by others in work to which he attaches his name. Eventually the case was decided against Lawes, and Belt was awarded £5,000 damages.[5]

In 1898, at age fifty-five, Lawes took up cycle racing and held the National Cycling Union amateur record for twenty-five miles, covering it in 51 minutes 15.8 seconds. 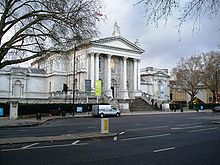 Buildings near the manor house at Rothamsted

Lawes succeeded his father as Baronet on 31 August 1900, and in 1902 he assumed for himself and his heirs by Royal Licence the additional surname (and arms) of Wittewronge. He was one of the founders of the Royal Society of British Sculptors in 1902 and became its second president. Lawes-Wittewronge created a colossal marble group, "The Death of Dirce". (Dirce: a woman in Greek mythology.) Bronze versions of this were exhibited in 1906 at the Royal Academy and in 1908 at the Franco-British Exhibition. In 1911, the marble group was exhibited at the International Fine Arts Exhibition in Rome, where Lawes helped to arrange the British sculpture. This was later erected at the family estate at Rothamsted and a smaller bronze replica became part of the collections of the Tate Gallery[6] and stands outside the entrance of Tate Britain.[7]

In 1902, Lawes helped judge the world's first major bodybuilding competition. Organized by famed strongman Eugen Sandow, the event was held in London's Royal Albert Hall, and was judged by Lawes, Sir Arthur Conan Doyle, author of Sherlock Holmes, as well as Sandow himself.[8]

Lawes married Marie Amelie Rose on 8 April 1869. Their only child, John, succeeded to the baronetcy on his father's death at Rothamsted at the age of 68, after an operation for appendicitis.