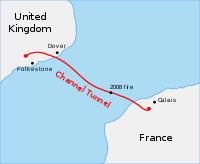 Map of the 2008 fire in the channel tunnel

The CTSA was established by the Treaty of Canterbury. It advises the Intergovernmental Commission on safety matters, and ensures that safety rules in the Channel Tunnel are in line with prevailing safety laws.[2]

The CTSA has five members from France, and five from the UK; leadership alternates annually.[3]

After safety rule changes which would permit Eurostar to use German-made Siemens Velaro rolling stock, the French government dismissed their delegate to the CTSA, and brought in a replacement.[4][5]