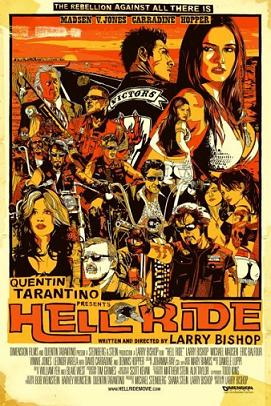 "Hell Ride" (2008) is a feature film from being released under the "Quentin Tarantino Presents" banner. The film promises to be a blood and sex-soaked tale of motorcycle revenge and retribution. Bishop took extra duties on this film by not only starring in it, but wrote, directed and co-produced with Michael Steinberg and Shana Stein producing and taking on the job of Executive Producer. This is Bishop's modern-day take on those 1960s motorcycle flicks he used to turn out for B-movie masters American International Pictures. It's the project Tarantino inspired Bishop to begin some five and a half years ago, when he told Larry, "It is your destiny to write, direct and star in a movie,'" and said he would help produce it.Fact|date=June 2007

Hell Ride premiered at the and a trailer can be seen on [http://www.comingsoon.net/hellrideredband.php ComingSoon]

Larry Bishop stars as bad-ass biker Pistolero, (named after the original title for ’s "") who along with The Gent () and Comanche (), hit the road to avenge the death of Pistolero’s old lady Cherokee Kisum (Julia Jones), by the Six Six Six's, a rival motorcycle gang. and bike riding legend star as members of the satanic biker gang the Six Six Six's.Fact|date=June 2007 stars as an old member of Pistoleros gang.