Speedloader
This article is about the firearm accessory. For the guitar bridge, see Floyd Rose SpeedLoader. 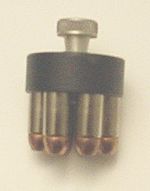 Side view of a HKS speedloader for a 6 shot .44 Magnum revolver.

A speedloader is a device used for loading a firearm or firearm magazine that will run out of ammunition very quickly. Generally, speedloaders are used for loading all chambers of a revolver simultaneously, although speedloaders (of different designs) are also used for the loading of fixed tubular magazines of shotguns and rifles, or (with other designs) the loading of box or drum magazines. Revolver speedloaders are used for revolvers having either swing-out cylinders or top-break cylinders. Non-top-break cylinder revolvers having fixed cylinders must be unloaded and loaded one chamber at a time. 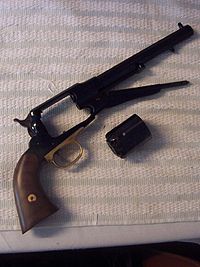 An 1858 New Model Army blackpowder cap and ball revolver replica. The cylinder has been removed from the frame.

Revolver speedloaders make the process of reloading an appropriately matched revolver much faster than reloading one round at a time. Swing-out and top-break revolvers are designed to eject all cartridges with one movement, and speed loaders allow loading with but a single additional step. Speedloaders also provide a convenient way to carry ammunition for a revolver. Speedloaders do not allow revolvers to be reloaded as fast as semiautomatic handguns, at least, not without considerably more practice.

Prior to the introduction of speedloaders for revolvers, reloading of revolvers was typically accomplished by manually loading each cartridge into each chamber from dump pouches, cartridge pouches, and other cartridge holders.

Prior to the introduction of cartridges, circa 1861–1873, older black powder cap and ball revolvers often were used with multiple replaceable cylinders functioning as speedloaders.[citation needed] As the reloading process for a cap and ball revolver was rather lengthy and time-consuming, carrying already-loaded cylinders with percussion caps placed on cylinder nipples was a considerable savings of time for reloading one's revolver. This practice was primarily done on Remington revolvers, as their cylinders were easily removable and were held by a cylinder pin, unlike the early Colt revolvers which were held together by a wedge that went through the cylinder pin.[2]

Another variation of the speedloader for revolvers is the Speed Strip introduced by Bianchi International. Intended as an alternative to loose rounds in a pocket or dump pouch, it holds six cartridges in a re-usable Neoprene plastic strip. The strip operates by placing the cartridges one or two at a time into their respective chambers, and "breaking" the rounds off the strip into the chamber.[3]

While much less common than revolver speedloaders, speedloaders for tubular magazines, called quickloaders, have been around for many years and offer many of the same quick reloading ability benefits. The simplest quickloader of this type is the one used for rimfire rifles with front loading tubular magazines. In this case, the quickloader is simply a tube that that contains a magazine-capacity number of cartridges, with a seal at one end and a gate at the other. To load the magazine, the follower is removed, the rifle is pointed upwards, the tube is placed over the end of the magazine, and the gate is opened. Gravity then pulls the cartridges from the quickloader into the magazine, the quickloader is set aside, and the follower is replaced. Any length of tubing or pipe of the right diameter can be used in this way, with a simple pin through the middle serving as a gate. Commercial rimfire quickloaders often have multiple tubes joined together in parallel, with a single rotating gate. This allows multiple reloads to be carried, with reloading accomplished by simply rotating the gate in line with the next full tube of ammunition.[4]

Loading a firearm magazine, particularly one with a large capacity and a corresponding high spring pressure pushing the rounds to the top of the magazine, can be quite difficult. A number of devices are available to make this task simpler, which are sometimes called speedloaders but are more commonly known as magazine loaders, stripper clips, spoons, or stripper clip guides. The simplest are inexpensive devices that depress the top round in the magazine, allowing the next round to be partially inserted with no pressure on it. These are also called "thumb savers", and address ease of loading more than speed of loading. There are also devices available for certain popular firearms, such as the Ruger 10/22, that accept loose ammunition and will load a round into the magazine with a simple push of a button or turn of a crank. These are more complex and expensive (US$25 to US$50), but are more truly a speedloader since they do greatly reduce the time required to load a magazine.[6]

A stripper clip is a device that holds a number of rounds, usually from 5 to 10 rounds, and allows them to be inserted into a magazine (fixed or detachable) by attaching the clip to a special bracket and pressing the rounds into place. Military ammunition is often packaged in stripper clips, which, in older bolt action rifles, could be loaded directly into the rifle's fixed magazine using a bracket machined into the rifle's action, or in modern rifles by the use of an adapter or guide that attaches the stripper clip to a detachable magazine.[9]

Most repeating airguns are revolver type mechanisms (even though they may be modeled to look like a semi-automatic firearm), and the most common "speedloader" is a removable cylinder. Since the pressure in an airgun is low enough that an injection molded plastic cylinder is all that is needed to hold the pellets, these removable cylinders are inexpensive enough for the shooter to purchase several, and simply replace the empty cylinder with a full one. Other airguns use a clip that is cammed through, which operates like a linearized revolver cylinder, and as these clips are also removable and inexpensive they serve as speedloaders.

Paintball markers are generally gravity fed, and so a hopper is used to hold the paintballs. A paintball marker speedloader usually consists of a large container with a wide mouth called a pod, designed to refill the hopper as quickly as possible.

Other types of paintball markers, referred to as "Stock Class" markers are fed by a horizontal feed tube, holding between 10 and 15 rounds. These markers are usually fed through a special feed gate by "ten round tubes" that are similar to plastic cigar tubes.